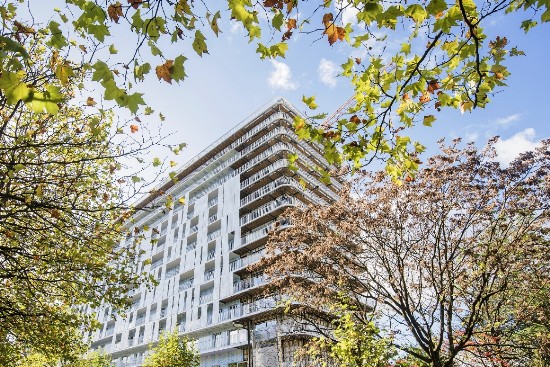 A major residential conversion project was inaugurated yesterday by architectesassoc and developer Matexi. Leopold Views involves some 201 apartments in a former office building located at the beginning of the Rue de Genève, just around the corner from the Place Meiser, and on the main road to NATO and the airport.

The project, which started in 2014, threw up a number of challenges for the architects. The depth of the building meant that apartments were placed on each side, with terraces, rather than being transversal. The apartments themselves are in the form of studios (50), 1-bedroom (30), 2-bedroom (71) and 3-bedroom (42). Internal walls are non load-bearing so that future modification by owners is possible. Each apartment has a terrace, which is large enough to virtually constitute an extra room. The terraces themselves were manufactured using a new method  almost complete pre-fabrication before delivery  for positioning and finishing on-site. They surround the building completely, creating what the architects refer to as a Parisian  almost Haussmann  feel. The perforated white metal of the exterior part of the façade also gives Leopold Views a look which is substantially out of the ordinary. Common areas have been included in the building to try and create a community spirit  these areas being attributed to a group of apartments on each floor to help the process.

Converting former office buildings to residential use involves not just issues of the typology of the future apartments, as architects Marc Lacour and Sabine Leribaux explained. One of these issues is that apartments are much heavier than offices: every apartment has kitchen equipment, sanitary facilities and more. A 20,000 m² office building does not have to support the weight of 201 cookers, 201 fridges, 201 toilets and showers To verify that the building structure is suitable for this new use, Sabine Leribaux explained a technique which was news to the assembled journalists: swimming pools are placed in various places and filled with water, which represents an even heavier weight than the apartment fittings. The competent authorities are then able to confirm the suitability for conversion. The swimming pools are of course removed.

A final point about this location. The RTBF/VRT site alongside the Place Meiser, just a few hundred metres to one side of Leopold Views, is also to be redeveloped into a site accommodating a substantial amount of residential accommodation; and the Regions Josaphat site, just to the other side, is also scheduled for more of the same.