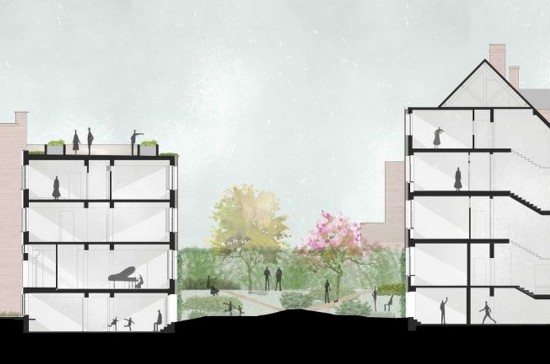 The winners of the third edition of the architectural competition hosted by the Brussels region under the banner of be.exemplary were announced at an event this morning. The organisation explained, through its director Christophe Bastien, that 28 eligible and high quality projects had been received, 10 in category 1 (small projects) and 18 in category 2, large projects. From these, 4 winners were named in the former, and 5 in the latter  in no particular order.

While most of the news in real estate is made by large office projects, it is interesting to note that none of the submitted candidates at all were offices, and several were schools. The criteria which have to be met to be eligible are promoting high quality architecture and urbanism, having asocial dimension, taking up environmental challenges and contributing to the circular economy. Submitted projects have to be innovative in at least one of these, and correct in all of them. This was further explained by Christophe Bastien who said that we are after all building for the future and that this is more than just a competition, it is part of a whole programme.

In category 1, the four winners were Vignette  a family house in Auderghem, Finstraat  a conversion of industrial premises in Molenbeek into mixed housing, Jaspar  converting a former maids room tall and narrow building in St. Gilles into apartments, and ABC  (Art Basics for Children)  a polyvalent educational space in Schaerbeek.

Category 2 produced projects of a type more often seen on this website. Grande Halle in Molenbeek is a 1,642 m² crèche alongside the canal, set to welcome 72 children. Involving young people from the district in the project is one of its major benefits. Optima is a 4,467 m² project which brings together a Dutch-speaking school and a French-speaking school on one site.
Mutsaard is another school, Dutch-speaking and extending to almost 11,000 m² in Laeken. It aims to have common activities with the local district. Ambassade sees the former Spanish Embassy in Schaerbeek converted to inter-generational housing (2,683 m²) and contributes to the circular economy by employing local people and businesses in its creation. Recypark, finally, is a large covered household waste centre along with a skate-board park alongside the canal at Anderlecht. The major feature here is the unusual mix of functions, the covering of a function which everybody needs but no one really wants to see and the use of reclaimed and recycled materials for the covering.