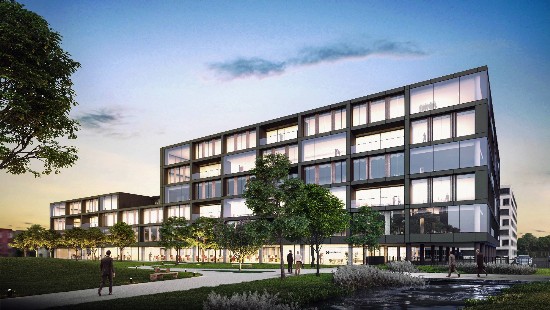 The Link in Antwerp, a building developed by Ghelamco, has now been sold to Baloise Insurance at what is a new prime yield for office investments in Flanders  5.20%. This news has been released by real estate consultant JLL, who acted in the sale.

The Link is a brand new state-of-the-art office development located at Posthofbrug 2-8. it is made up of 2 office buildings representing a total of 26.723 m² of offices and 526 parking spaces. The location alongside Berchem railway station led to the building being 95% quickly let to quality tenants including VF Europe , SWECO, 24+, Astrea

The Link is the work of architects Jaspers-Eyers and ABV+ and is described by JLL as being possibly the most modern office building in Flanders. It features excellent finishing levels, modern applications and a pleasant working environment, responding to and interacting with, the needs of twenty-first century tenants.

JLL goes on to say that with this successful office development, Ghelamco is one of the first Belgian developers to latch on to the emerging trend in Antwerp and respond to a market in need of modern offices.

Adrian Glatt, Head of Capital Markets Belux, on the transaction: Antwerp is the second largest office market in Belgium after Brussels. Its success is due to the excellent fundamentals which have only got better in the past few years. As such, take-up figures nearly tripled between 2013 and 2017, whereas vacancy decreased by almost 3%. Ghelamco did a great job in perceiving and responding to the needs of an office market which is clearly on the rise, reaching new prime rents of 155/sqm on the way.