You are here : HOME > NEWS > Mipim, the planet and the real estate industry

Mipim, the planet and the real estate industry 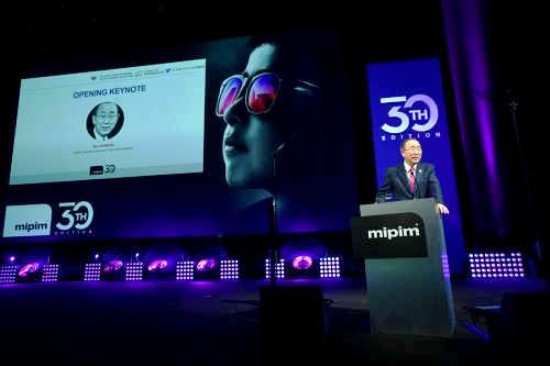 Mipim opened its doors for its 30th edition yesterday with what is certainly one of the most powerful opening speeches it has ever heard. The opening address was given by non other than former United Nations Secretary General Ban Ki-moon.

His theme was, unsurprisingly, the future of our planet and the challenges facing mankind. He very often referred to the crucial role of the real estate industry in ensuring that its buildings take environmental sustainability into account. You have a crucial role to play he repeated on more than one occasion.

On his topic, he started by saying that the world is undergoing profound change which is bringing elevated uncertainties. There are new risks and this is not being helped by some world leaders taking advantage of the uncertainty for electoral reasons, rather than to build bridges, which is what they should be doing. This point caused his speech to be interrupted for a few seconds as the audience, well over a thousand hardened real estate professionals, applauded. Ban Ki-moon had a special mention for two world leaders who have been in the spotlight recently. Firstly, he referred to the yellow vest protests here in France as an understandable demonstration of the public showing its dissatisfaction and its desire for change. And President Emmanuel Macron came in for praise, because, said Ban Ki-moon, instigating the great debate, in other words actually taking note of the democratic outcry and trying to do something about it, is a courageous stance. He said that France would emerge stronger from this.

The other world leader to be mentioned, perhaps inevitably, was Donald Trump. Ban Ki-moon stated that the Paris agreement was the best way forward if the world was to save itself. Of Trump, who pulled the USA out of this agreement, he said Donald Trump cannot do this to humanity. But he rejoiced in the fact that over a thousand USA cities/regions/States have said that they are remaining within the agreement anyway.

The future is clearly about technology, Artificial Intelligence and the Internet of Things, including in real estate and buildings, and this could have massive implications. Globalisation, which also involves our industry, has tended to lead to some inequality and imbalance, he said, whereas the objective is to be inclusive and not leave anybody behind.

The key to the future, said Ban Ki-moon, lies with industrial leaders and the smart cities they help to produce. We have to find a new model for our cities, because the current urbanisation mode is pushing humanity to a crisis. The cities we create today have to flourish in the climate of tomorrow, so science, engineering and innovation are crucial. We need creative cities with data that is used correctly. He therefore appealed to the real estate industry to act responsibly, and made a statement which really brings the subject to life. Having fabulous cities, however, is of no use at all if they are destroyed by climate change. If we dont act now, coastal cities in particular, will simply disappear. We cant negotiate with nature, it always goes its own way. And climate change is no longer a debate, it is a fact.
So with that, Ban Ki-moon was completing the circle and explaining the important role to be played by our industry.