You are here : HOME > NEWS > Temporary occupation - a new solution for Brussels 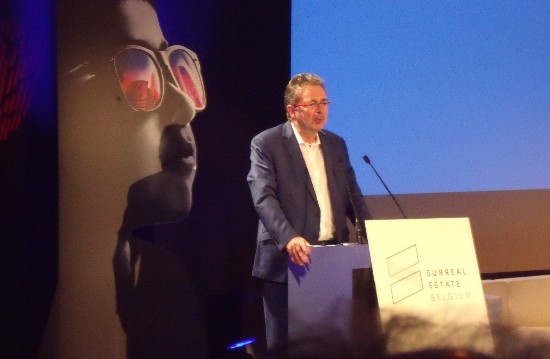 The major Brussels presentation at Mipim was on a subject which is coming more into the spotlight as building occupational habits change. This is the concept of Temporary Occupation. Minister-President Rudi Vervoort started by saying that evolution in Brussels is not just about the canal, but is everywhere, and that we need to seek new solutions for the city of tomorrow, with the citizen as a central player. He said that the old view of Brussels was that it was a utility city for various types of organisational and economic activities. But now the intention is to ensure that it is a city for living in, with a mix of functions. If people are leaving the city to live elsewhere (and he cited La Louvière as a favourite destination), it is because they can no longer find what they need in the capital. Further densification of Brussels is obligatory in providing new residential accommodation, and Rudi Vervoort has no time for people who, sometimes in the more elegant south of the city, do not want to see their environments change. He also objects to those who live in the past, saying that everything is ok as it is.

Moving on to temporary occupation, this creates a new dynamic and a new way for the city to use what it has.

Following on, perspective.brussels explained that temporary occupation is a way of giving unused buildings back to the population, either because they are simply empty, or because they are awaiting transformation to a new use. This type of solution can also be used to experiment with new usage types, to see what works and what doesnt. To support all this, there is now an on-line guide to temporary accommodation, because it was explained that a legal and regulatory framework is necessary  including a way of ensuring that urban taxes are paid.
Typical temporary occupation includes cultural (Delhaize Molière was used for street art), short term retail outlets etc.

Brussels Bouwmeester Kristiaan Borret pointed out that a total of six million square metres of space in the region is currently temporarily occupied in one way or another  space which may be above shops, or industrial eye-sores To put this into perspective, it is the equivalent of half of all the office space in Brussels. He produced a list of well over 40 organisations and associations of different types, which currently use this solution. And he showed two examples of how what starts out as temporary occupation can mutate into something else, in other words become more structural. Firstly, the Schieveblock building in Rotterdam was rented in its totality by a collection of organisations for a short time  but the solution worked and the short time has become permanent. In Berlin, the former East German Haus der Statistik was abandoned and saw squatters, the cultural activities, the volunteers providing help to refugees. This last use has also become permanent, again showing the benefit of enabling buildings to be occupied in a less formal manner for a short while. Kristiaan Borret also insisted on the financial aspect though, because everything costs money and the building owners need to be paid.