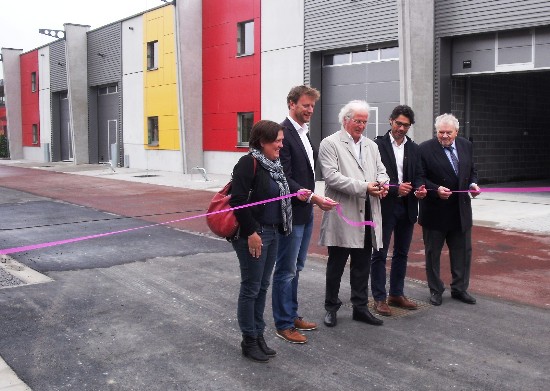 Yesterday saw the inauguration of another small enterprises site by citydev.brussels. This time, the development agency had turned its attention to very small enterprises and crafts-persons. It opened Newton II, a complex of 16 small units located just off the Boulevard Paepsem in Anderlecht, immediately behind the larger Newton I which had been inaugurated five years ago. Antoine de Borman president of citydev, explained that this latest site increased to over 200 hectares spread over 48 sites, the total space opened by the agency and destined for companies requiring space within the Brussels region. One of the benefits of this type of installation, citydev Director General Benjamin Cadranel went on to say, is that it encourages collaboration between the small companies, a sort of mini eco-system which helps mutual development.

Speaking for the Region, Economy and Employment Minister Didier Gosuin said that there was a need for space in which small enterprises could find a home. He also congratulated citydev and its main contractor Houyoux, for having completed the works on this site in only 10 months. And with regard to this, alluding to the notoriously slow pace of Brussels administrative procedures, Benjamin Cadranel had a few days earlier said how unusual it was to begin and end a project under the same administration!