You are here : HOME > NEWS > We Are Real Estate off to a flying start

We Are Real Estate off to a flying start 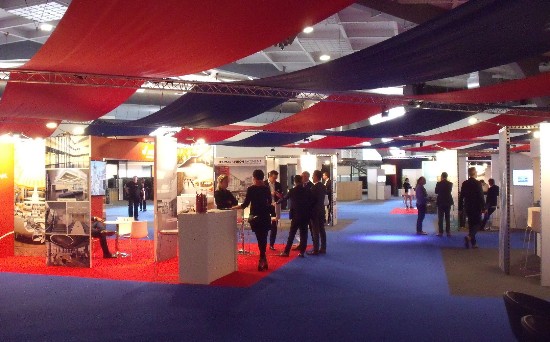 The new We Are Real Estate trade show got underway yesterday in Palais 7 of Brussels Expo. As the organisers had wished, the layout is bright and open, with no large closed stands or narrow corridors. Among features are also the all in formula whereby exhibitors and guests alike receive breakfast and lunch, all included in the price of the ticket, from one of five catering points and via servers moving through the hall. This had the desired effect of not emptying the exhibition space at lunch time.

Another interesting feature is the room set aside for short exhibitor presentations. This is called the Pitch Arena and it is indeed in the form of an arena (or a Shakespearian theatre) with the presenter in the middle and the audience all around.

Show organiser Gregory Olszewsky of Matexpo, when asked by ourselves, outlined some of the objectives. First of all, we asked, him whether with all his experience in organising this type of fair, he had learned anything new. What I have learned that sometimes when you have an idea, you have to push it through and keep going. When we first started this everybody said are you sure you want to do this?, but we were sure there was place for this type of fair and a lot of companies told us to go ahead, so we did. So thats what Ive learned  never give up!
Has the new layout philosophy worked? Well we wanted a fairly uniform concept for all vexhibitors so there wouldnt be a race to have the biggest and most expensive stand  its all about the message you have, not the packaging around it. Exhibitors have said they like the concept.

What the exhibitors have to say
To find out if these objectives had been achieved, and why they had decided to support this new venture, we spoke to a number of exhibitors. First of all, Maigret Jansen of Leuven University (KU Leuven) had this to say: We are here because this is the opportunity, the platform, to meet a lot of people from the practical real estate environment. As a university we know a lot of academics in the domain, but it is important for us to make the bridge between academic knowledge and the practical side. We offer a lot of post-graduate real estate courses.
Moving on to François Lejeune of AG insurance (part of AG Real Estate) we discovered the following: We are here to explain project financing. There is always business to be done at a show like this  we are B2B and also B2C.

One of the traditional presences at real estate shows in the capital is the Brussels Capital Region itself. Micha Kapetanovic explained : As the Region of Brussels we have to promote and defend events which take place in our region. This is a new real estate show in Brussels and it is completely normal for us to be here and represent all of the stakeholders of the Region, such as citydev and the others. We are showing that the public sector can be and will be a partner in the development of the Region.
Do you like the new type of layout? I dont know about like it but its original and it has meant some change for our organisation and our manner of living a fair, so thats new and we will have a good debrief with the organisers after the show to see what was positive and what may have been not so positive.

Olivier Vuylsteke is Asset and Investment Manager for Leasinvest Belgium: The interest of this show is for us to promote ourselves and gain visibility, and to meet the different stakeholders in the market  brokers, investors, architects This is the place to be and to be seen. It is very important for Brussels to have a real estate show of this type. Its been a tradition for many years to have this kind of set-up and it is absolutely necessary for an international market like Brussels to have a national and international real estate fair.

Christian Sibilde of DDS+ Architects explains that as good Brussels residents, they always believe that this is their home territory: Following Realty, we now have to be here from the start, and the salon itself will tell us if it is going to be a success.