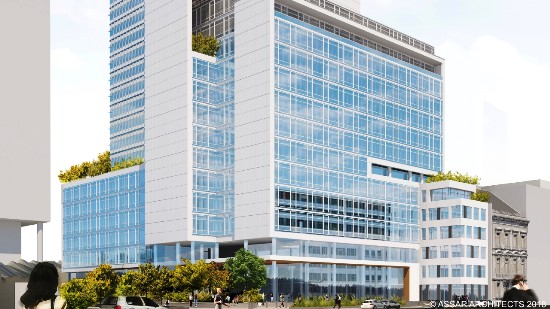 There is more news concerning the major Atenor project Realex located on the plot between Rue de la Loi and Rue Lalaing close to Résidence Palace in the European district. As reported by LEcho, the permit decision is now expected by around the end of June, and works should be able to start.

Realex has grown in size since it was first envisaged and now comprises two towers with a common podium unit, rising to 128 metres in height. It will offer 60,000 m² of office space, 1,800 m² of retail space and 300 parking spaces. As Atenor CEO Stéphan Sonneville explains to lEcho, the original project was located on a plot next to the now constructed The One. But since then it has been joined by the former headquarters of the VDAB and the former office building of the Scientology sect. This latter does not form part of the current Realex plans but will be converted to another use at a later date.

One of the most important aspects of the development is the possibility that it will house the future conference centre of the European Commission, which has been the subject of much speculation for a long time. Stéphan Sonneville is not allowed to show the images of the proposals made for this aspect, he tells the newspaper, but believes that there is a good chance of success. However, the Commission wants its conference centre by 2023 and the dossier is currently going through the notoriously complex and long Brussels Region administrative procedure. The permit request has been lodged within the framework of a Zoned Regional Planning Regulation (BRUZ), but if this is contested it will be up to the Region to deliberate within a regional regulation (RRUZ). A layout guideline (PAD) is being prepared in case it is required