You are here : HOME > NEWS > Stations and urban development 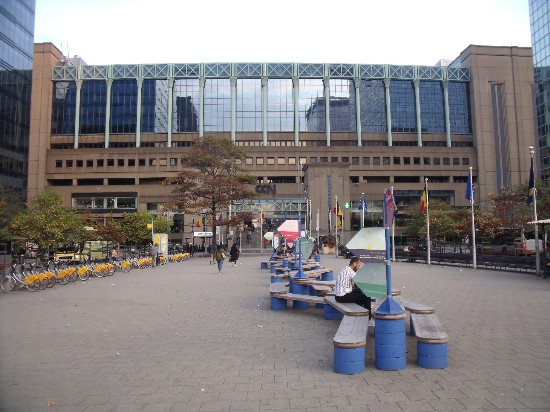 The round table session held by the Urban Land Institute (ULI) in Brussels on June 13th and entitled Stations and Urban Development, addressed an issue which is very much of our times. Many municipalities (including Brussels itself) are taking measures designed to get people out of cars and into softer forms of transport. Stations are therefore changing, and during this round table a number of presenters set out some case studies and thoughts. In his opening remarks, former UITP Secretary General Alain Flausch said that railway stations are a significant cornerstone of urban development, and also that so many millions of passengers represent a major marketing opportunity. This is a theme which recurred several times during the round table. Ian Mulcahey, MD of Gensler London, had the unenviable task of trying to forecast what is going to happen next. And his opening point, despite going back some 200 years, demonstrated one of the major problems facing transport system designers now. Just before the industrial revolution, he told the participants, the UK had connected all of its cities with canals. Then the steam engine was invented, bringing trains, and the canals immediately became obsolete. This is the problem right now. New airports are being designed, for example, but Richard Branson is testing a Hyperloop concept, a train which is faster than a plane This continual increase in speed (with faster trains and TGVs etc.) will also impact on our new stations. People will not spend 30 minutes in a station for a 20 minute journey.

As President of the Belgian National Pact for Strategic Investment, Michel Delbaere has been an advisor to the Belgian government on investment policy. And with the Belgian model in mind, he confirmed the opening remarks of Ian Mulcahey: it takes so long to get all the administrative permits etc. that by the time you come to build whatever it is, the reality has changed and the plans have become obsolete. And staying in Belgium, the final presenter was also from Belgium  Patrice Couchard, General Manager Stations for the national rail operator SNCB. He said that sustainability had been little mentioned during the round table, but was critical. The development in and around the main Brussels Midi international and national railway station, is aiming for BREEAM Excellent. But once again, the reality in Brussels is that it takes so long to get permits. Stéphan Sonneville of Atenor would certainly have something to say about this in the specific case of the area around Midi.
Realestate
Tim Harrup
20-06-2019