You are here : HOME > NEWS > CCN renewal on the road

CCN renewal on the road 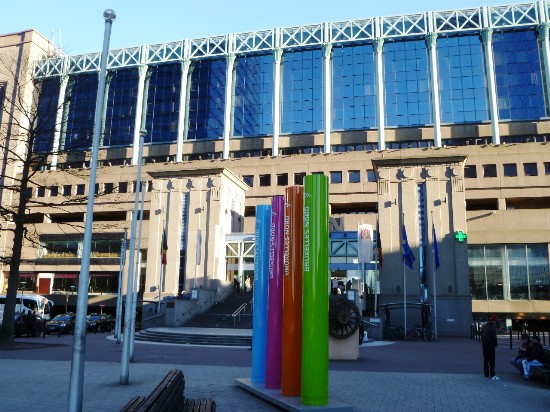 Following the news of the sale of a Brussels icon (Souverain 25) last week, another of the capitals emblematic buildings is now in the spotlight. The story starts in April of this year, when AG Real Estate, Atenor and Axa IM - Real Assets, acting on behalf of one of its customers, signed a partnership agreement to execute a project on the CCN site, next to the Gare du Nord in Brussels.

In view of the planning, social, mobility and sustainability stakes this project entails, the partners elected to launch a competition for the drafting of an overall vision report for the redevelopment of the site. Nine multi-disciplinary teams, including several firms of international scope, took up the challenge, proposing their concept of the future of this symbolic object in the heart of the Brussels North area. After consulting the public authorities, the three project initiators, based on an analysis and constructive exchanges, appointed the international multidisciplinary alliance made up of ArchitectesAssoc+, Multiple and TVK, whose proposal stood out among others of extremely high quality.

The proposal of the winning consortium, say the project leaders, is based on an in-depth analysis of the specificities of the project area and aims to guarantee the utmost connectivity between all the means of transport operating there (public transport, shared mobility, soft mobility and traditional transit).
The goal is to optimize the existing installations and provide a functional mix based on entirely re-conceived quality public areas with different uses.
In terms of urban life, the project is the cornerstone of the renewal of the Brussels North area and demonstrates the ambition to make it both a fluid crossing point and a pleasant living environment. The aim will be to add life through the project, for the benefit of the public area.

The team of architects and planners has already begun work in order to deliver this large-scale project as soon as possible. A permit application will be submitted during the course of 2020. Works could start in 2021 after the departure of the Brussels Capital Region, which occupies the premises.