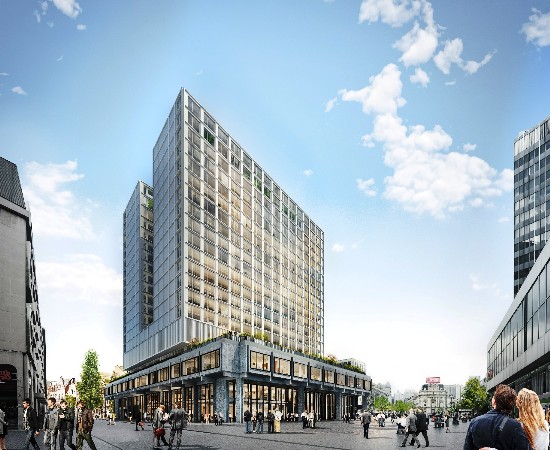 We reported earlier this year on the decision of WeWork not to take up the space it had scheduled in the Multi Tower (former Philips building) at the Place de Brouckère in the centre of Brussels. This setback has not put off real estate developer Immobel, which has just announced that it has taken a 50% stake in the company which owns the building (Brouckère Tower Invest NV).Immobel acquired the shares from US investment fund DW Partners.

This is one of the major parts in the redevelopment of the whole area around de Brouckère and the Bourse, and sees Immobel (together with Whitewood), transforming and marketing the 45,000 m² office building dating from the 60s. Theproject is part of Immobels portfolio in the Brussels city centre, where the company is also developing the mixed city centre projects De Brouckère (former Allianz building) and Centre Monnaie (bpost and City of Brussels). The estimated end date for the works is the last quarter of 2021.

The major characteristics of this iconic city centre building with its dual towers, are that it extends to 45,000 m², across 19 above ground and 4 underground floors. The transformation has attracted BREEAM excellent rating. Where mobility is concerned, De Brouckère metro station is virtually outside the front door (direct access to South Station in around 6 minutes and to Central Station in around 3). The building also boasts 522 underground parking spots. The entry into the shareholding by Immobel now means that the owning parties are as follows: Immobel 50%, DW Partners 40%, Whitewood 10%. The parties have mandated the architectural concept and the contractual works to RDBM Conix and Cordeel respectively.
Realestate
Tim Harrup
01-04-2020
Tweet