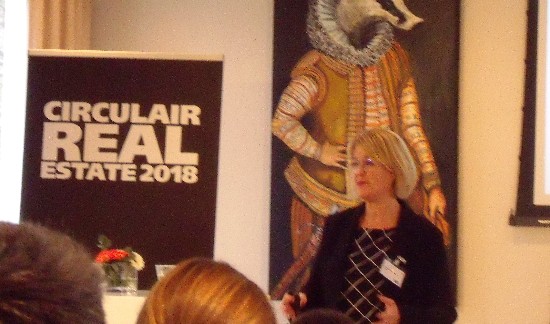 A conference organized by Management Producties took place yesterday in Antwerp under the auspices of the VEB (Flemish Energy Organisation), on the subject of Circular Real Estate. Opening proceedings, Hilde Carens, project leader for energy efficiency and the circular economy at the VEB, said that the organisation aimed to be proactive, and to generate results through awareness raising, data gathering and analysis. The objective is to make the installation of energy efficient techniques in new or renovated buildings, easier.

Following, her colleague Brigitte Mouligneau, transition manager at the OVAM, showed an analysis which demonstrates the VEBs approach: how many natural resources will be left in the future for someone who was born in 2010?. She also showed how the building sector uses/loses the resources available to it. To meet the objectives of keeping global warming below 2°, she said, alternative materials and building methods are needed  which is why the word transition is relevant. This will involve, among others, the use of biomass, the development of new business models and the commitment of all sections of the industry and of society at large.

Recycling
Jean-Christophe Vanderhaegen, director of the Brussels Building federation, used a concrete example of how a 19th century factory chimney was recycled, and all possible materials used elsewhere. The chimney had been toxic and abandoned, but proved to be a source of materials for other projects. He also pointed out the five basic concepts behind this desire to build  and particularly to renovate  sustainably. These are: assume your heritage  Brussels is looking to the future without rejecting the past; put human beings at the centre of everything  the social impact of actions is highly valued; keep value though the recuperation and recycling of materials; work together  a bottom-up philosophy rather than top-down; and finally: learn by doing  this is a relatively new domain and we need to learn as we are going along, through concrete experiences.

Remaining with renovation  after all, the vast majority of our buildings exist already, rather than being new  Sven Wuyts of Factor4 explained the Green Deal including circular buying, and said that not every building is suitable for renovating into exemplary energy efficiency, so selecting the right ones was crucial.

Early days
A debate took place with two speakers  Peter Impe of BBL (Better Environment Organisation)and Ruben Van Daele of Bopro. The fact that these are both service organisations perhaps reflects the fact that this whole domain is relatively new, and we are still at the learning stage. A case study and an explanation of BAMB (buildings as Material Banks) followed, along with a debate on the financial impact of circular real estate.

This is a topic which will become more widespread, and particularly as the whole notion of the circular economy in urban environments (agriculture etc) is adopted in an increasing number of cities.
Realestate
Tim Harrup
29-11-2018