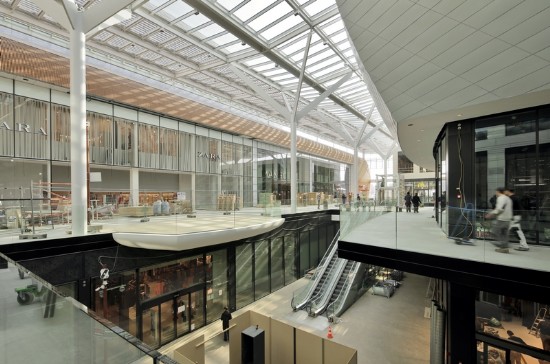 When Docks Bruxsel opened its doors at the end of last week, it officially became the winner of the race to be the first shopping centre to the north of Brussels to open its doors. But when Docks Bruxsel looks down from the top step of this particular podium, it will see nobody else. Looking back over its shoulder, it will see Neo and Uplace at varying distances from the starting line.

Returning to the centre itself, Docks Bruxsel accommodates 113 shop units, 8-screen cinema, an indoor adventure area with intellectual and physical tests and around 20 cafés and restaurants. There is also a conference facility named the Espace Godin after the former industrial occupant of the site, which can accommodate up to 1,500 persons. The architecture has been designed to be light and airy, and the construction and the centre have attracted BREEAM Excellent certification. On this point, it is now felt by experts in the domain that no future shopping centre will be able to open its doors without certification, such is the public awareness of environmental responsibility nowadays.

Among retailers to be found in the centre are certain which are not present in other Brussels centres. Notable retailers include Media Markt, G-Star, Superdry, JBC
And in what is claimed to be a world first, there is a Samsung Experience Store. Kiabi has its first Belgian store in Docks Bruxsel and H&M Home its first in Brussels. An experience store zone, 76 square metres, is available for short-term occupation, and is designed to ensure that there is a great feeling of movement and novelty within the centre. This is currently occupied by Peugeot and Nespresso.

Developers Equilis point out that they have been reflecting on the development of this site for around a decade in total, and the final result, of which they are naturally very proud, is what they refer to as a Shopping District. They say they have conceived this site to remain in harmony with its surroundings, and with modern mobility in mind. On this latter point, Equilis point out that the centre can be reached by boat, bus, on foot, car, tram, bike or train. For those coming by car, the new roundabout just inside the Van Praet bridge has a direct exit into Docks Bruxsel. The opening of Docks Bruxsel has also created a substantial number of jobs.

Musical and other events accompanied the opening weekend, and more are scheduled for next weekend. Sunday openings are planned for December 11th and 18th.
To return to the topic with which this article stated, it is quite likely that the next piece of concrete news we will be reporting involving shopping centres in Brussels will be the completion of the renovation to City 2 in around eighteen months