You are here : HOME > NEWS > Antwerp looks to the future

Antwerp looks to the future 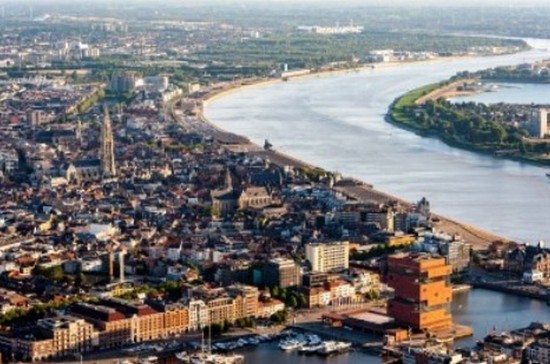 At Mipim, the City of Antwerp highlighted some of the projects through which Antwerp is, in its own words, quickly becoming the rising star of capital investment. The city is also now ranked third for connectivity in the FDI (Financial Times) report European Cities and Regions of the Future 2018/2019. This includes both physical and digital infrastructure such as the port, the airport, road and rail, internet and ICT development.

Among urban projects are of course the renovation and transformation of the Port House, which won the Mipim Award for Best Refurbished Building, and in the same vein, the Antwerp Waterbus Network, which is still expanding. Another major infrastructure project is the covering of the Ring Road, a mega-project even by European standards.

Blue Gate Antwerp, a public-private-partnership development of an industrial estate, is looking to provide space for smart logistics and innovative production among others. New South, for its part, will be a residential and green development, an entirely new and vibrant district in a neglected and forgotten location. Shops, restaurants, schools, sports facilities and a park form part of the plan.

Another brand new city district in the making is Regatta, one of the largest urban projects in the Flanders region of Belgium, to be developed alongside a 12 hectare park and a 30 hectare boating lake. This is located on the other side of the River Schelde, and it is expected that a new bridge will make access to the nearby city centre much easier. In total, some 280,000 m² will be developed, including all urban functions.

In terms of the increasingly important circular economy concept which also forms part of Antwerps projection into the future, a word from Greg Clark, senior fellow of the Urban land Institute (ULI) Europe, to conclude: Antwerp has three important strengths on which it is building its circular economy. Firstly, the presence of a world class port that has the ambition to create a zero-waste economy with cleantech, sustainable development and chemical processing. Secondly, Antwerp has both a strong digital industry and a growing creative sector, with a solid base of entrepreneurs who are excited about the circular economy. Thirdly, an important cycle of infrastructure investments is being made in Antwerp.