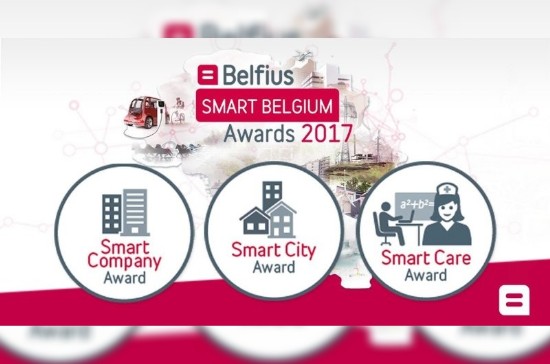 At the Belfius Smart Belgium Awards yesterday evening, keynote speaker Carlo Ratti from MIT University in Massachusetts, gave some interesting insights into research surrounding Smart Cities, prior to the awarding of the prizes.

Firstly, he said that Smart Cities are a convergence of the physical and the digital. He pointed out that by 2030 around 70-80% of the worlds population will live in cities (some 5 billion people) but what is perhaps less well known is that: cities only cover 2% of the worlds surface, but account for 75% of energy use and 80% of CO2 emissions. He also said that MIT had 'tagged' 3,000 items of rubbish - from tin cans to banana peel, and traced where it all actually went - hundreds of kilometres in some cases! Carlo Ratti said that if we could understand and control this, we could save far more than recycling could ever do.

Introducing the event, Belfius CEO Marc Raisière said that his company has instigated these awards to celebrate Belgian talent, and because people tend not to make enough noise about what is actually going on. Smart Belgium involves all citizens, from workers to Board members. And the competition notion of Smart Belgium brings together domains as vital as mobility, healthcare, the environment, the digital world

The Awards attracted a total of 330 entries, and these were filtered down to ten finalists in each of the six categories. The two categories which are of most interest to us here are Large cities  more than 30,000 inhabitants, and Small cities.

The Award in the Large cities category went to not a city, but a region  Hainaut and its IDEA inter-communal body. This was for a project involving the drying of sludge from water purification stations, using geo-thermal and solar heat. The new system is believed to have cut by a factor of four the number of trips made by trucks in the domain of waste. To win this award, Hainaut had to beat off challenges from Seraing, Mechelen, Charleroi, St. Niklaas, Jambes, Brussels, Kortrijk, Liège and Antwerp.

In the Small cities category, towns which are not normally in the public eye were involved, and the winner was Bonheiden (to the east of Mechelen), for a project which is getting children onto bikes. Children who go to school by bike or on foot, rather than in their parents cars, receive a bonus enabling them to participate in the town festival for free. Huge amounts of CO2 emissions have been avoided, and around 150,000 km are calculated to have been ridden.

For the record, the other winners were: Smart small company  BeeOdiversity for an air quality project using bees; Smart Larhge company  Glutton for electric and driver-friendly street cleaning machines; Smart care  Mariasteen for a project enabling handicapped people to work. The Public prize went to Mariënstede for another project in the domain of employment for (mentally) handicapped persons.