You are here : HOME > NEWS > ULI looks at North District and urban future 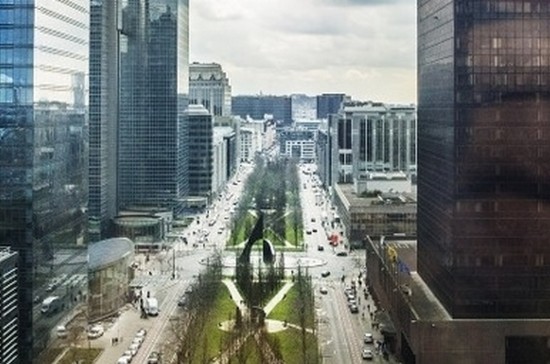 The ULI (Urban Land Institute) held a conference yesterday on the preparation of cities for the future, with an emphasis on the regeneration of the North District of Brussels.

Starting with the North District, Sven Lenaerts of the Up4North organisation explained the history of the area. It was first conceived as a sort of mini-Manhattan in the 1960s, but fell foul of economic recession and was not revived until the 90s. The original plan would have seen high level walkways connecting the skyscrapers, and more interconnection with the local population. Eventually, and despite the fact that a residential area was demolished to make way for what we have now, these elements were left behind. The area thus suffers from a lack of public services and facilities  the very things which are being built into every new district nowadays.

Various initiatives are now helping to put this right, including the use (temporarily) of the very place where the conference took place  the 23rd floor of the World Trade Centre  as a shared office for many bodies working in the environmental domain in its widest sense. There are events, concerts, meetings, and demand is such that it cannot be met. There is also an urban farm alongside WTC, whose objective is to produce at least 5 kg of fresh vegetables each week.
Another initiative can be seen right in front of the CCN (North Station) just a few metres away: benches and tables have been installed to encourage locals and commuters to spend a little time. Interestingly, this is not an end in itself, but the organisers are observing just how people use this area, so that they can better plan for the future. Direction arrows also point to some of the features within walking district, which people can visit.

On the ground floor of WTC is an exhibition which has also been taking place in Rotterdam, under the name of the Missing Link. This link is the very pragmatic notion that while we know where we are today, and we know more or less where we would like to be, we dont yet know how to make the transition.

Following this, Benjamin Cadranel, CEO of citydev, explained that one of the ambitions of his organisation is to start manufacturing activities in Brussels today. Brussels is very well known for making rules, he started, but it used to make things, and this is what we would like to see again. This type of activity benefits districts, he believes, in more ways than just creating jobs. It contributes to the circular economy and bring pride and liveliness.

Greenbizz is a good example: it has small productive units making products including leather items, iron goods, chocolate, shared food and beer. There is also an incubator for start-ups. The condition for companies working here is that they have to be part of the circular economy.

Mixed use is also very important, and with 400 apartments alongside Greenbizz in the Tivoli Green City, this is being demonstrated in practice. Benjamin Cadranel alluded to some upcoming citydev projects, which also adhere to these same principles  especially in terms of mixed use.