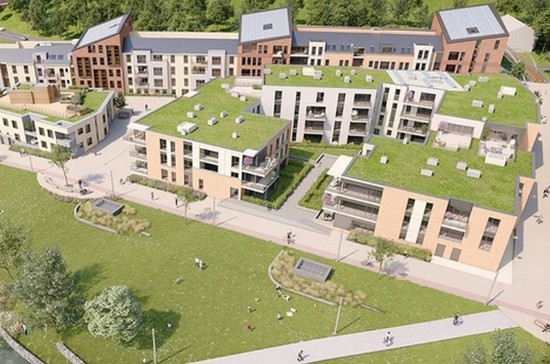 Works have finally started on the major residential complex at Louvain-la-Neuve which is named Esprit Courbevoie. The ground-breaking ceremony took place a few days ago by the two companies which are undertaking the development  Thomas & Piron and Besix Red. The first part of the programme involves five buildings: a 13-apartment residence at the entrance to the complex, described as the first multi-residential passive building of the university city; a 65-apartment complex (1-3 beds); a 92-unit complex (studios, small apartments and 3 to 5 bed apartments); a building of 43 smaller apartments and a 36-apartment building with services for seniors.

In total, therefore, 249 apartments of various sizes and destinations, covering a surface area of 22,000 m². Thomas & Piron indicate that some 65% of the units have already found takers since the marketing phase began around a year ago.

It will be recalled that Esprit Courbevoie is being constructed on the covering of the new RER car park located behind the station at Louvain-la-Neuve, and which is now in service. The project has been under discussion, followed by numerous permit phases, since 2003. It is also interesting to note that the conception of Louvain-la-Neuve itself involves the town being built on a covering above the large car park, which enables the centre to be totally car-free. During the last phases of its construction, the developer Peter Wilhelm of Wilhelm & Co. spoke frequently of the new concept that this type of configuration represents. It is also a fact that the Louvain-la-Neuve authorities wish to make of the city a multi-purpose and multi-residential place, and not just a university town. This has not always been to the liking of the students, who fear their city losing its character.