You are here : HOME > NEWS > Help for Babyboomers. 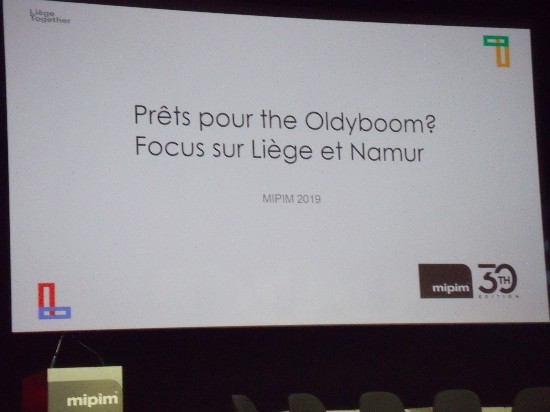 A new word (to most of us at least) was introduced by the Universities of Liège and Montreal at Mipim yesterday. It was in the title of the presentation Getting Ready for the Oldyboom. The people being referred to are those who, a few years after the war, constituted the babyboomers. Logical, therefore, some 70 years on!

The objective of the presentation was to explain some misconceptions about the ageing of people, and to see how some projects are beginning to address the changing needs of the population as its average age increases. First of all, the representatives of the Universities, which are working together on the ageing process, gave some interesting figures from their professional surveys. For example, and going right in the face of the general public perception, only 8% of over 65s live in institutions, only 11% suffer from depression and only 9% feel alone. In terms of happiness, older people are found to be twice as happy as the young!

Of greater concern perhaps, is that the negative perception of the elderly is at its highest in the healthcare sector. And on top of this, architects have tended to design care and rest homes like hospitals rather than homes, which doesnt help their occupants at all.

Projects designed to counter the negative trend and cater for older people include Care-Sy, a specialised business park for this whole domain near Namur. The land will not be available until 2021-2022 but great interest is already being shown by potential occupants. The project will presumably represent a sort of cluster for the seniors care/housing domain.

In Verviers, a former textile machine site is being converted to 200 riverside apartments for seniors and inter-generational occupation. The site will include services, and rather than simply opting for what is always done, the developers and the city are currently defining what sort of services are actually needed.

Still in the Verviers region, the Jardin des Paraboles, on a 50 hectare site, is intended to be a services village. Along with residential units, it will include a rest home. The principal is focused on moving, eating, leisure, loved ones, and a sense of community. It is based around a principle of a Blue Zone which indicates a high density of very elderly residents.
Most laudable in this case is that the developer (ImmoQuest / Christophe Nihon) is being advised not just by architects, but by the experts on ageing from the University of Liège.

And as no report on this subject can be complete without letting technology have a say, it was pointed out by the University of Montreal that new technologies allowing people to stay at home, and involving remote health monitoring, mobile ageing, AI, intelligent environments are all beginning to play an important role.