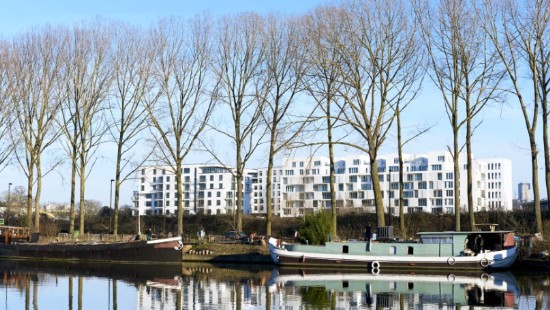 It has sometimes been said that the canal district is not a district at all, as it includes buildings in different parts of Anderlecht and Molenbeek. However, two major developments between the Ring and the South Station are beginning to make a previously semi-industrial, semi-abandoned area come to life. The developments in question are Atenors City Dox, just 800 m from Eaglestones Nautilus. a little further away from the city centre. They are respectively 1km and around 2 km from South Station. The fact that Nautilus already has a large hypermarket open at ground floor level (Carrefour) and that City Dox has attracted Regus, means that the Regions desire to bring mixed use to its priority districts is taking shape.

City Dox is located in Anderlecht on a plot between the Boulevard de lIndustrie and the Rue de la Petite Île. This complex will eventually extend to around 11,000 m². The current status of the complex is that phase 1 has been delivered, comprising some 8,600 m² of which 2,000 m² has been let to IWG (Regus). Phase 2 comprises 2,700 m² and works are set to begin in the next few months.

Among the features of City Dox are apartments, business services, a rest home and serviced residence, a school and green areas, along with retail activities. Charging points for electric vehicles and an innovative waste management and energy system, are also part of the offering. For its part, Nautilus, on the corner of the Boulevard de lIndustrie and Boulevard Paepsem, comprises around 200 apartments along with the retailing.

It should also be pointed out, to conclude, that there appears to be scope for much more development in this part of the city.