You are here : HOME > NEWS > Redevelopment for CCN agreed 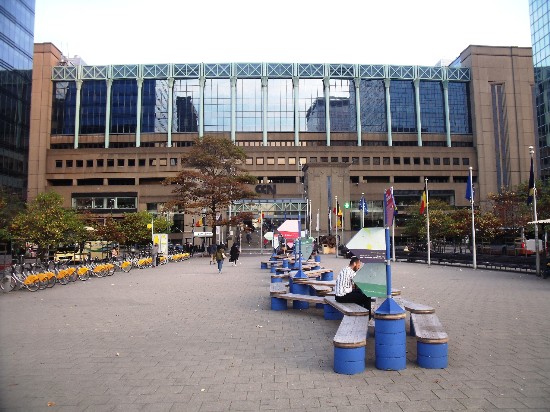 Developer Atenor has often been in the news for its frustration at the length of time it has taken to get the Victor project at Brussels South Station past the administrative stages more than eight years. Undeterred, Atenor is now turning its attention to another major Brussels station, the North Station.

Atenor has thus announced that with AG Real Estate and AXA IM - Real Assets, it has signed a partnership agreement for a major development on what is currently known as the CCN site, above Brussels' Gare du Nord station.

The developer says that the site has all the advantages required to provide an ideal setting for a redevelopment scheme embodying the new vision of urban lifestyle that all actors of the city aspire to. Exceptional access to public transport (a metro and bus station are an integral part of the building, and the railway station is underneath and behind), the project lies at the heart of a district that has recently embarked on a deep transformation.

It goes on to say that he neighbourhood of the big urban stations, by combining density, mixed use and public spaces of quality, will constitute the pillars of the development of the cities of the future. This project should be a perfect representation.

While the CCN may be an architectural gem from the outside with its art deco features, the interior offices bear witness to a rigid, closed and early 20th century style which is no longer to todays requirements.

Works on the project are scheduled to begin in 2021 when the Brussels-Capital Region (which currently occupies most of the existing building) will leave the premises.