You are here : HOME > NEWS > Cofinimmo in major agreements 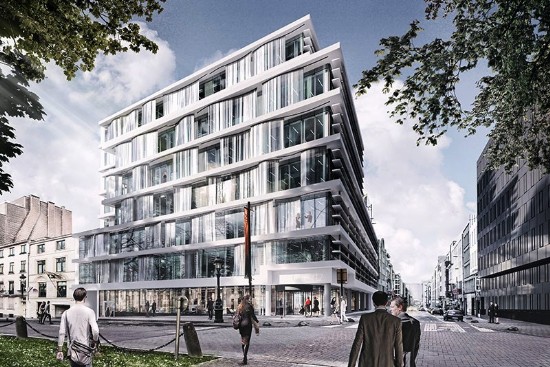 Cofinimmo has been giving details of major activities during the first quarter of 2019. Firstly, on February 20th, it signed an agreement with the European Free Trade Association (EFTA), the EFTA Surveillance Authority (ESA) and the Financial Mechanism Office (FMO)1 through which these institutions will become usufructuaries of the whole Quartz office building. The agreement will commence following delivery of the works, scheduled during the course of 2020, and has a term of 15 years.

The site, located on Avenue des Arts/Kunstlaan, in the centre of Brussels (CBD), previously included a building that was leased to the Federal Buildings Agency (Régie des Bâtiments) for nearly 20 years. After the building had been vacated in January 2017, it was completely demolished to make room for a new construction that will occupy a central position on the Avenue des Arts. The new project, for which an architectural competition was launched, was fully designed using Building Information Modelling (BIM). Based on transparent architecture, it provides integral glass façades, with a view to the courtyard garden from Rue Joseph II/Jozef II-straat.

Quartz will offer nearly 9,200 m² of modern and modular offices and versatile surfaces, spread over eight floors. The floors will have an unusual clear height of three meters, allowing its users to enjoy a maximum amount of daylight. A terrace will also be set up on the roof.
Cofinimmo is aiming for BREEAM Excellent certification (already obtained for the Design phase). The building will comply not only with the 2015 energy regulations, but also with additional high demands in terms of quality and sustainability set forth by Cofinimmo for its construction, renovation.

Outside of the centre, the NEO II public procurement has been assigned to the consortium composed of CFE and Cofinimmo. The purpose of this public procurement, which was launched by the city of Brussels and the Brussels-Capital Region in 2013, is a Design-Build-Finance-Maintain (DBFM) contract for a convention centre and a high-class hotel. The complex will be located on the Heysel plateau, north of Brussels, next to the Atomium. The goal of NEO II is to establish Brussels as an international conference city. This prestigious 49,000 m² convention centre will be able to accommodate more than 5,000 participants simultaneously in various events such as international conventions, shows and meetings. The centre will be coupled with a luxury four-star hotel, with a surface area of 15,000 m² and comprising 250 rooms. The consortium CFE/Cofinimmo called on contemporary French architect Jean Nouvel to design the site. The Belgian bureau MDW Architecture will supervise the implementation of the project. Construction works will start after obtaining the permits, now planned for 2021, and should take three years.