You are here : HOME > NEWS > Major makeover for uptown Brussels 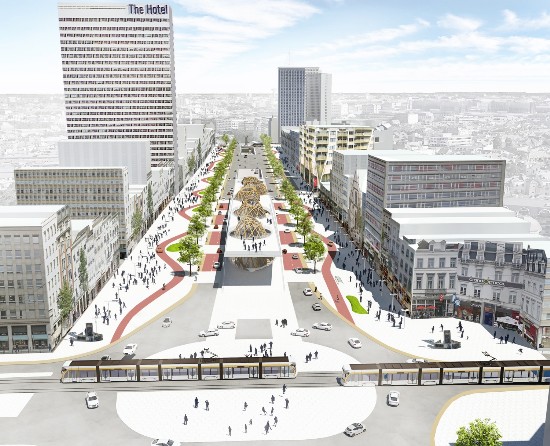 There is a considerable amount of activity surrounding the uptown shopping district of Brussels around the Toison dOr/Bld. De Waterloo and the Chaussée dIxelles.

Firstly, the main players involved in the potential renovation of the Toison dOr/Bld. De Waterloo (traders, BECI, BEL, Touring, local inhabitants and others) have agreed on the plan of architectural bureau Pierre Lallemand & Partners for this evolution. This has reached the stage of a permit request scheduled to be lodged in around two months from now, shortly after the Federal elections.

The new design, as can be seen from the image, is radically different from the current layout. The basic objective, according to the architects, is fluidity of movement for users of all types of transport  pedestrians, cyclists, car drivers, rather than simply speed. A one-way car route and a one-way cycle route would be created. Pedestrians, however, would have priority.

Another of the priorities is to transform the central area between the two avenues from being a barrier into a pivotal and usable space. Part of the central area becomes pedestrianised and the two sides become part of a single whole rather than two separate zones. The central area will also include a botanical garden with retailing and events possibilities.

This project is not without giving rise to some controversy and even anger, however. Brussels Region mobility minister Pascal Smet rejected any idea that this progressive plan had anything to do with the imminent elections. Speaking to our colleagues at LEcho, he said: This is not a little plan we put together just before the elections. The permit request lodged for the rehabilitation of the Toison dOr and the Boulevard de Waterloo is the result of an international competition launched with the bouwmeester and of a long series of meetings with the shopkeepers and inhabitants of the district.

Pacal Smet was no less belligerent with regard to some of the local traders who, clearly not in favour of the result of these meetings, have put forward an alternative permit request, apparently with the approval of Pierre Lallemend. Still speaking to LEcho, he retorted: Coming with your own plans and without the agreement of the public road and pathways manager is a bit strong. We are no longer in the era of Paul Vanden when private groups determined the fate of the city. Now, its the public authorities in discussion with the inhabitants.
Realestate
Tim Harrup
30-04-2019