You are here : HOME > NEWS > Neo: finishing line in sight 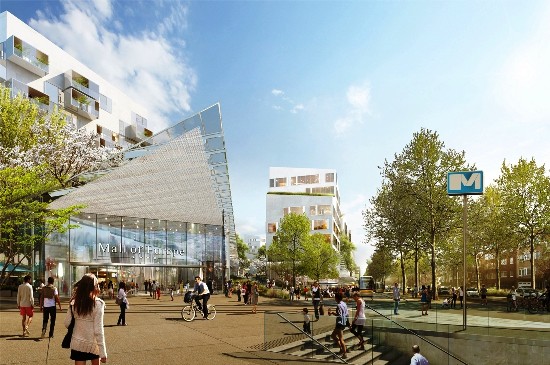 It is perhaps fitting that the developers of the Neo complex (the Brussels Region) selected the first We Are Real Estate trade fair, held on the Heysel plateau itself, to give an update on progress. This was the occasion for the audience to hear of some completion dates which are a little less distant than has often been the case.

One of the main requirements of the overall plan is that there is greater constructed density around the stadium, thus leaving more of the rest of the site available for other activities. The first part of the complex  Neo I  will include the shopping centre, leisure activities and residential accommodation with, it was pointed out, more or less equal surface areas. Neo II will include the large congress centre and hotel named The Brussels Pavilion Gardens which the Region is lacking, a lot of sports activities and a vast park. Where transport is concerned, access to the A 12 will be modified, and tram line 9 extended. Access is already good, with tram 7 and a metro line. It only takes, for example, 18 minutes by metro from Heysel to Brussels South Station.

In more concrete terms, Phase I known as Europa will include the 72,000 m² shopping centre, dining facilities, a cinema and 575 lodgings. All parking will be underground, and this will make a break, the Region said, with the current situation which sees a disproportionate amount of the site taken up by surface parking. Final permits are expected during the course of this year, and the works are scheduled to take place between 2020 and 2023, with opening planned for the end of 2023.The housing will then continue to be built over the next few years.

Neo II, with its 5,000 seat congress centre and 250+ room hotel, is expected to have its final permits next year, with works taking place between 2021 and 2023. The park will come afterwards, with many different types of sports facilities on offer.

In terms of the consortiums which have been retained to construct the complex, Neo I is with Unibail/Rodamco/Westfield/Besix/CFE, and the architecture is by Jean-Paul Viguier (Paris) and Art & Build (Brussels. The construction of Neo II has been mandated to Cofinimmo and CFE with architecture by Jean Nouvel (France).