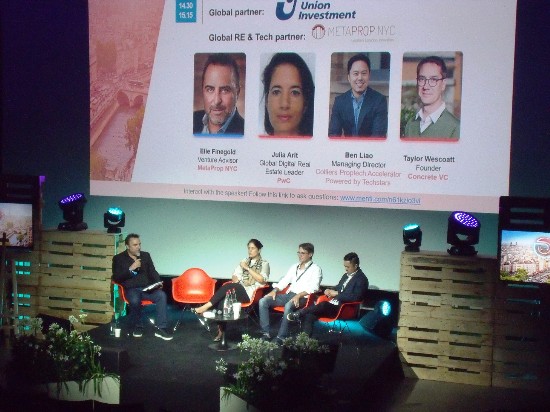 One of the features of the Mipim Proptech exhibition and seminar which ha s taken place this week in Paris, is the first round of the Mipim Startup awards. Six young companies had the daunting task of making a presentation of exactly five minutes before an audience and a jury of three experts. Following this, there was a five minute session of tough questioning by the experts, and at the end of the sessions two finalists were named to go forward to the grand final at Mipim in Cannes next year.

A brief summary of what the six contenders are doing is also a good way of understanding a little more about how the notion of Proptech (or property technology) is changing the real estate market.

First on stage was Askporter whose representative started by pointing out that real estate is the largest asset class in the world  above oil or gold  and so managing it properly is crucial. Askporter is a digital concierge to which questions are put by telephone, 24 hours a day, and which can therefore respond to all types of tenant problems (the heating boiler is broken) along with managing all of an agents tasks. One feature is no savings, no pay.

Dabbel, next, is aiming to arrive at what was described as self-driving buildings. It was stated that there are 1.8 million inefficient buildings (from points of view such as energy) in Europe, and they are particularly inefficient if they are manually controlled. Automating all of the 22,000 variables in a buildings management gets rid of human error (and time constraints) and ensures the building functions efficiently. Up to 31% of savings in energy are said to be possible, and in the end the building takes care of the people, not the people of the building.

Third to present was Hello Energy, whose final aim is not just to make building users understand the energy domain, but create energy-positive buildings i.e. even better than zero energy. Other benefits can be certification such as BREEAM.

The afternoon session began with Homebeat Live, a system which focuses on enabling the owners of individual apartments in multi-owned buildings, to look after their own property management. This is achieved through an open sysrem so that owners can set up their own digital platform. The system is also able to be used by property managers.

Mayordomo Smart Point followed, a secured delivery service into lockers which are located within buildings. It is said that the app allows users to connect to and order from any e-commerce shop in the world. Users can also leave items (such as a broken smartphone) for the repair company to pick up. It is claimed that an average of 45 minutes is saved on every transaction. Discounts from suppliers are shared between the building owner, the end user and Mayordomo.

Pinql completed the line-up for the day. It aims to solve the disparity between lack of housing in France and the fact that there are three million empty units in the country. It is therefore a match-making platform along with being a daily management and rental management point.

Finally, the judges delivered their verdict: Askporter and Mayordomo scored the highest totals and will be going forward to the grand final at Mipim in Cannes next March, when they will be up against winners from the other parts of the world  the USA and Asia.