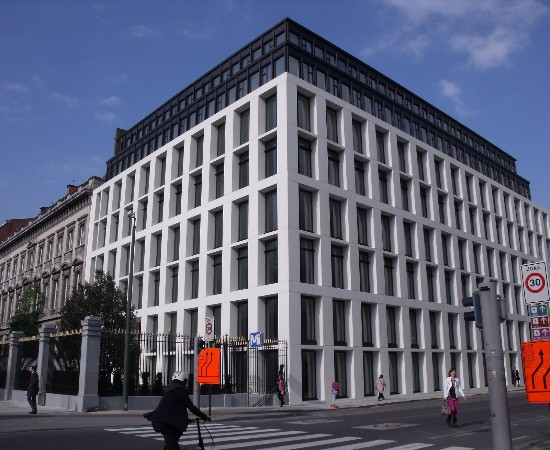 Real Estate consultant CBRE has produced figures for the second quarter of the year in the Brussels office market. It calculates that 97,300 m² of office letting and sales transactions were signed in the Brussels market in Q2 2019. Combined with the strong activity from the first quarter, the first half of 2019 has seen excellent take-up of 330,200 m². Deals in the second quarter were led by corporates and were diverse in terms of market geography and business sector. High quality space continues to see strong demand. Deals in cutting-edge offices include BSH Bosch and Regus/Spaces leasing a combined 9,100 m² in the Gare Maritime project, and AXA Belgium leasing 3,247 m² in the Elite House project. Grade A space (that is, recently completed projects) is also filling up. Regent Park (photo) and Belliard 40 are now 85% let after second quarter deals, while Treesquare on the Square de Meeûs is now fully occupied. So far this year CBRE has noted that large corporate transactions are driving take-up, which it says is a welcome change from recent years and one that signifies positive performance and expectations, willingness to invest and an overall healthy market. Of the 13 deals greater than 5,000 m² in the first half of 2019, ten were closed by corporates. And of the 34 deals greater than 2,000 m², 29 were completed by corporates. Major corporate deals in the second quarter include FedEx/TNT leasing 11,418 m² in Leopold Square 40 and Silversquare leasing 7,200 m² in the Platinum.

Where vacancy is concerned, CBRE says that of a total office stock of 12.627 million m², 952,000 m² is considered vacant. This means that the average vacancy rate for Brussels has declined to 7.5% from good activity and properties being taken off the market for future renovations. Readily available Grade A space (new and well located) is just under 80,000 m², on the back of much needed completions. Conversion of offices into alternative uses is ongoing, especially in buildings of between 3,000 and 5,000 m². This quarter has seen some 20,000 m² of office conversion to hotel and residential use, namely Bourg 115 (5,200 m²), Stalle 65 (8,800 m²) and Twin Squares Navona (6,300 m²), leading to a total of 38,000 m² of offices converted in 2019. Investors continue to find value repurposing obsolete facilities for stand alone use or complementing a mixed-use development.

The development pipeline through 2021 is relatively robust at more than 700,000 m² and growing. The amount of available space, however, is rather limited at less than half of this amount. Recently, speculative projects have been delivered at 60 to 100% occupancy. One notable completion this year has been Tervueren II (9,000 m²), the new Loyens & Loeff headquarters overlooking the Cinquantenaire Park. Of the 175,000 m² planned offices for 2019, approximately 59,000 m² is available. Major projects for this year with available space include Manhattan Center (North), Spectrum (Leopold), and HD 54 (Decentralised SE).
Realestate
Tim Harrup
28-08-2019