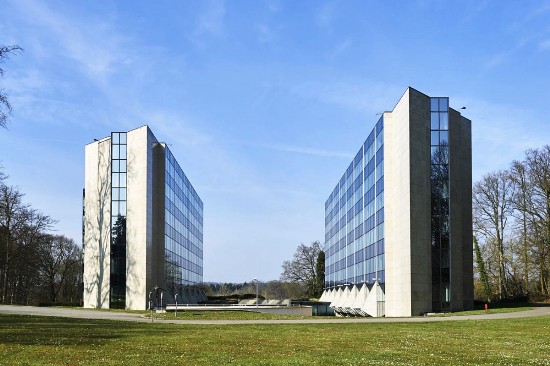 In presenting its half year results yesterday (post-tax profit up by over 10%) Atenor as usual took the opportunity to give an update on its property portfolio. It also reconfirmed its 5 year growth plan, which is to become more visible as an international urban developer, and to give priority to organic growth. It wishes in particular to increase the size of its portfolio in cities and regions with higher economic growth, and thus to diversify geographically. This is targeted as a total of 900,000 m² of urban projects during the 2017 to 2021 period, up from 600,000 over the 2013 to 2016 period. The total number of projects is targeted to be at least the current 27 or more.

Turning to the portfolio, 38% of the total of 1.2 million m² (27 projects) is in Belgium and Luxembourg, 26% in Poland, 14% each in Hungary and Romania and the rest in France, Germany and Portugal. Some 74% of the total is in the offices sector, 20% in residential and 6% in retail.

Taking a closer look at ongoing projects in the Brussels Capital region, Atenor reports that The One and Realex in the European district have seen successful marketing of the residential portion. The offices (31,000 m²) were sold at the end of last year to Deka. The One and Realex represent a total of 56,000 m² of offices and are taking part in European Union calls for tender, including for the infamous 26,000 m² conference centre.

The canal-side City Dox development will extend to a total of around 157,000 m², and the phase one office building has already attracted Regus and Unilever. The second phase (32,000 m²) is beginning construction and is partly being developed with citydev. The third phase will include a school, residential units, production activities, retail units and more.

The long-running Victor project around the citys South Station has reached the stage where it will be reduced to 91,000 m² in order to correspond to the vision of the region. Studies are to be launched

At the North Station, the Atenor  AXA IM  AG Real Estate partnership will see works start on the CCN building start in 2021, when the Brussels administrations have left the premises.

In Wallonia, Les Berges de lArgentine is progressing, while Nysdam (where Atenor has its headquarters) is now fully let and is to be offered for sale. At Mons, the last two residential buildings of Au Fil des Grands Prés are scheduled for delivery next year. La Sucrerie at Ath now has five of its six buildings completed.