You are here : HOME > NEWS > New district for Soignies 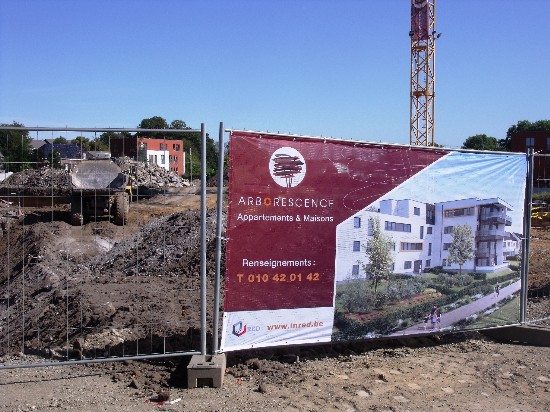 It is not only in our major cities that new districts are planned. This morning saw the official laying of the first stone of the Arborescence project in the Walloon town of Soignies.

This project will in time see 164 apartments and nine houses, along with 200 underground parking spaces and much open green space, constructed on a two hectare site very close to the town centre with its services and to the station. Bernard Jacquet, CEO of developers Inred, benefited from the occasion to explain some of the history of the project, and in particular how it is possible to pass the administrative phases much more quickly than is often the case elsewhere

First of all, there was a major obstacle to be overcome: the site was previously a factory, and 100,000 tonnes of very polluted ground had to be treated. At the same time, the single permit was applied for and granted in only two years, despite the residential orientation in what was an industrial district. Soignies Mayor Fabienne Winkel also praised the work of the architects (Loft and Osmose in a partnership specially established for this project) along with the members of her own administration and the developers. She underlined how important a step it is for a town like Soignies to decide to build a whole new district, and how important it is to be within walking distance of the centre.

When Arborescence is complete  scheduled for the end of 2021  it will offer one, two and three bedroom apartments along with the nine family houses. Great attention has been paid to acoustic insulation, low energy consumption and the layout of the public areas.