You are here : HOME > NEWS > New housing inaugurated in Schaerbeek 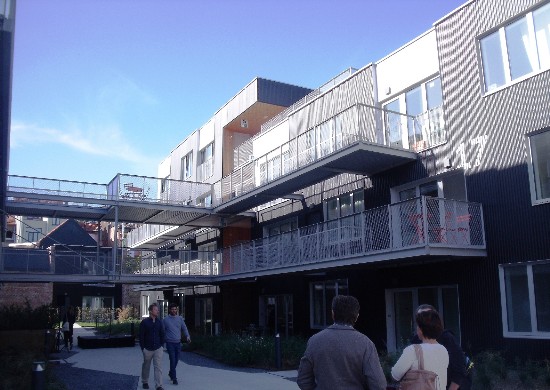 First, a word about the name. From 1880 this site had been the warehouse and depot of wood trader Lochten & Germau, located at number 237 Rue des Coteaux in Schaerbeek. The company was to stay until 2010 when it decided to move to more contemporary premises.

In praising the work of developers JCX Immo, architects Urban platform and contractors CIT Blaton, Cécile Jodogne also emphasised the way in which this development fits into the ambitions of the commune and the City for sharing life. Lochten 237, despite being a new and self-contained complex, is also very open to the rest of the commune. It meets the social and environmental objectives that are so much a part of modern property development.

In terms of facilities and architecture, it should first be noted that the units are all either passive or low energy. Facilities include 78 parking spaces, common areas such as a laundry, a childrens play area and a bicycle/pushchair shelter. There will also be common gardens and small allotments for growing vegetables and so on. Passageways between the units also serve as places where people will come into contact with each other.


JCX Immo CEO Sophie Le Clercq emphasized her companys attachment to this site by saying that it had been intended to sell it, but JCX has finally decided to keep it in the portfolio, and will continue to develop its attractiveness by adding more trees and greenery.

Both Cécile Jodogne and Sophie Le Clercq spoke of the tenacity and patience that had been required to bring this project to fruition, particularly in terms of the administrative procedures. They fell short of saying that this is an aspect of Brussels real estate life which we could do without However, Cécile Jodogne recalled that she had been the councillor in charge of planning when the project was first drawn up in 2010.