You are here : HOME > NEWS > Realty hits the coast 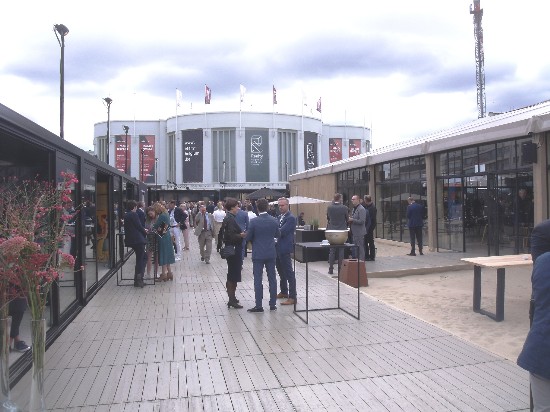 The new look Realty, described as Belgiums Real Estate Summit, opened its doors in the casino at Knokke Heist on the Belgian coast this morning. First impressions are of a very chic and elegant layout, with many of the 40 exhibitors being located around a central cafe/restaurant area on the beach, rather than in the main casino building. Access to the venue is facilitated by numerous signs pinned to lamp posts etc. at virtually every turn from the entrance to the town.

Inside the casino are the other exhibitors, and the conference halls, which host a full programme. One of these on the opening morning perhaps showed part of the philosophy behind the latest version of Realty. It was on the subject of investing in cities, and officials from four Belgian cities were invited to make their cases in front of potential investors, developers and others. It is not possible to summarise everything they said, but as an example of their priorities, the following represent a few elements. Charleroi is attempting to make its city centre more attractive to inhabitants, retailers and shoppers by encouraging the use of modes other than the car to come into the centre and by planting more greenery. On a similar theme, but with a slightly different focus, Kortrijk believes that the car has its place in the city, but this place has to be defined. Kortrijk is also investing heavily in renewing its city centre, and in particular in making more use of its considerable areas of water as a feature for attracting visitors. The city wants to be in the picture when the talk is of investing in Flemish towns. It is also applying to be the European Capital of Culture 2030.

Antwerp is working on the challenge (with which the other cities agreed) of a population set to grow considerably over the coming years. This will involve creating new facilities such as crèches, and making sure a social mix can be maintained. Mons, finally, is quite simply doubling the size of its city centre. This is being achieved by creating an entire new city district on the other side of the new Calatrava-designed multi-modal station (which is nearing completion). A passageway creates a link between the old and the new. Mons is home to great many institutions and has attracted major tenants such as Google and Microsoft. This leads to a high demand for construction  a point which is doubtless of interest to the architects and developers in the audience.