You are here : HOME > NEWS > Major Atenor development in Luxembourg 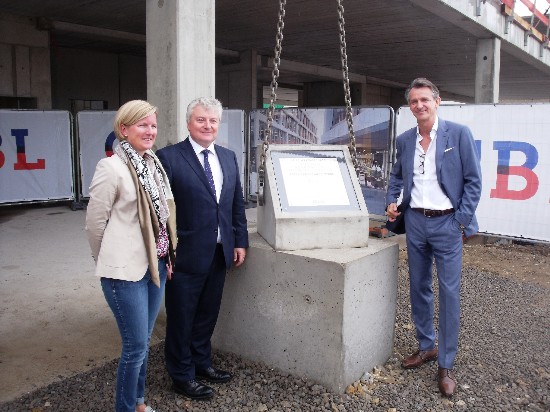 At the end of last week, Atenor took another major step forward in its international development. Already active in a number of countries  and in particular Belgium and Hungary  the firm officially launched the works for Buzz City, an office project in Leudelange, Luxembourg.

First to take the microphone was Leudelange mayor Diane Feipel, who alluded to the need to find a balance between the economic driver that this type of development represents, and the potential it has for using up natural resources. She praised the approach of Atenor and its financial partner in the operation, Fidentia. She referred to the project as a new business campus in the centre of the Grand Duchy and of the motorway networks.

Speaking for Atenor, CEO Stéphan Sonneville spoke of Luxembourg being at the heart of an open and competitive Europe, and a model of welcome for investors. He went on to say that as Belgians, we look with admiration at the way Leudelange (and Luxembourg) are able to turn vision into reality with such efficiency and speed. He confirmed, indeed, that Atenor looks to develop in communes which have a real vision for their futures. Of Buzz City, he pointed out that the project is designed to be flexible and to offer employers and staff the type of facility which is demanded in the modern era. He also spoke of the importance of business districts  such as Am Bann in which Buzz City is located  being occupied for longer than the traditional business nine to five hours.

In concrete terms, when it opens in 2021, Buzz city will offer four office buildings of four floors each, designed by Jaspers-Eyers Architects and with a total surface area of almost 17,000 m². A range of services is being included in order to make a complex which is much more than a business campus, but a genuine community. There will thus be a fitness centre, a café, a gourmet corner, a restaurant and potentially local shops. Along with the landscaping, this is all designed to offer not just the occupants of the building, but all the users of Am Bann, a pleasurable experience.

Where technical performance is concerned, Buzz City is of energy performance and thermal insulation class B (helped by dynamic external sun-blinds and high performance triple glazing), and has attracted BREEAM Very Good certification. High output boilers with low NOx emissions are being used. Rainwater will be collected from the green roofs, for watering the gardens, for cleaning and for use in the sanitary facilities. There will be 346 underground parking spaces with 12 electric vehicle charging points, and 15 exterior spaces. Buzz City is located 3 minutes from the entrance to Luxembourg city, 10 minutes from the station and 20 minutes from the airport. Bus services operate to the site.
Realestate
Tim Harrup
30-09-2019