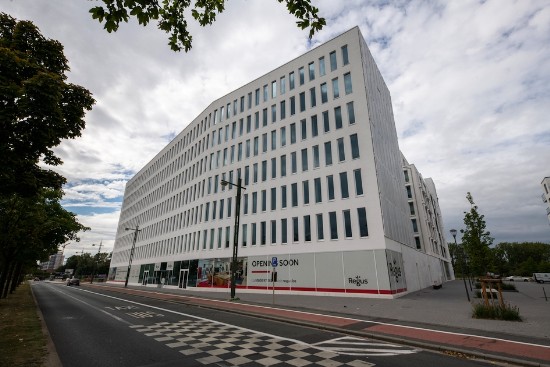 As co-working continues to play an increasing role in the world of work, and have an ever larger impact on the real estate domain, two new openings are significant for different reasons. Both are by the IWG (International Workplace Group, formerly Regus), but are in different places and under different brand names.

Firstly, advised by CBRE Luxembourg, the operator is to open a Spaces centre in the Grand Duchy. This transaction involves a lease acquisition in the newly built Impulse building, an office project located in the Station district, developed by Besix Red and owned by Swiss Life. The significance of this move is that it will be the first Spaces co-working location launched by IWG in Luxembourg. And this is not a timid toe in the water start, as the centre will cover no less than 6,400 m² over 7 floors, which is the whole building.

The building, is located on the Place de la Gare, and thus offers future users a train station and numerous bus lines right at the doorstep. Luxembourg Spaces Place de la Gare Centre should open its doors by the end of this year, after a few months of fit-out works.

The second opening is in Brussels and is under the original Regus brand. The company has just opened the doors of its centre at Anderlecht in City Dox, with more than 2,000 m² of shared workspace, offices and meeting rooms (70 offices, 44 shared workspaces, 3 meeting rooms and a terrace). These are located on the ground floor and first floor of a brand new building. The centre features large bay windows and has been fitted out in line with the Bauhaus industrial concept of Regus.

The significant factor here is the location. This part of Anderlecht is known as Biestebroek and is one of the priority development zones of the Region, part of the canal plan. City Dox itself offers a large number of apartments, a serviced residence, a rest home, a school, a crèche, shops, restaurants and green areas. Just to one side is the new Citygate 2 development by citydev, and a few hundred metres in the other direction finds Eaglestones Nautilus. The fact that Regus has decided to open in a developing (rather than developed) district demonstrates its belief that this part of Brussels, between the Ring and the South Station, will indeed become an important centre.
Realestate
Tim Harrup
01-10-2019