You are here : HOME > NEWS > Sou Fujimoto in Brussels 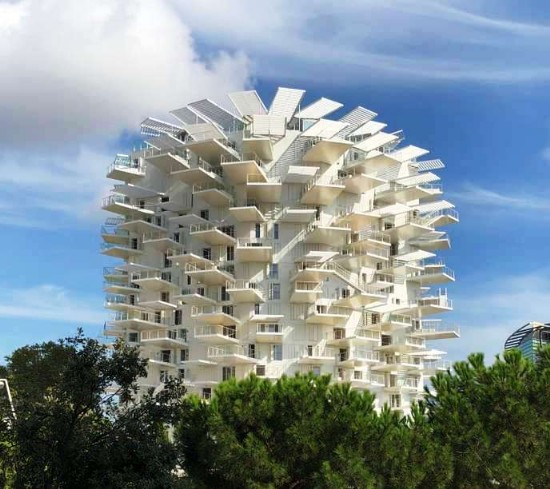 To open its fifth season of Lunch with and Architect lectures, Forum Press and Communication were honoured to have the presence of Sou Fujimoto. His building The White Tree (LArbre blanc) which has been built in Montpellier was described by Forums Kathleen Iweins as the most instagrammed building in the world. Sou Fujimoto is also to build a major complex in Brussels  a word about that later.

Firstly, though an explanation of some of his philosophy. He believes that nature and architecture have to combine in order to achieve buildings which respond to the needs of people, and he entitles his lectures Between Nature and Architecture. In physical terms, this is seen as a blurring of the boundaries between the inside and the outside, often through the use of trees and greenery as an integral part of the construction, and through having many openings so that people can see right inside a building even when they are outside of it. This is clearly to be seen in the Montpellier project, where terraces stick out around the whole building, enabling the inside of the apartments to meld into the outside, and creating a place where neighbours can talk, while ensuring that the psychological physical distance between dwellings is maintained. Sou Fujimoto also explained that the city of Montpellier wished for a new landmark (which they have most certainly got!) and that he himself wished to reflect the Mediterranean lifestyle, which involves a lot of outdoors.

Other notable buildings shown during the talk were a house in Japan which has an outside, a semi-outside and an inside  realised through boxes within each other like a Russian doll, and with varying degrees of openings and a great deal of glass. A project A Thousand Trees (Mille Arbres) to span the périphérique in Paris will, if built, provide a similarly visible landmark for the city as that in Montpellier. In London, the Serpentine Pavilion in Kensington Gardens represents a café and meeting area made out of thin white steel strips, encouraging people to move about and resembling a cloud on the ground.

Returning to Brussels, Sou Fujimoto has won the architectural competition to construct the Delta Tower, which he has renamed in his own style Floating Gardens. The name gives a clue to the concept, with many trees integrated into the complex. When complete, this project will include residential accommodation, offices, shops, gardens, hotels As Sou Fujimoto puts it: a village, a small society in its own right. It is designed to be an extension of the greenery all around, and has, of course, many openings throughout the whole complex.
Realestate
Tim Harrup
03-10-2019