You are here : HOME > NEWS > Real estate development in Brussels - the politicians speak 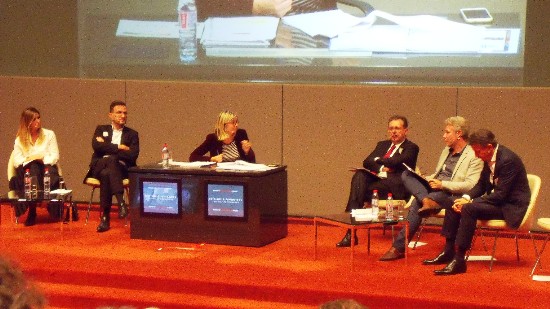 In its latest conference entitled Real Estate, Climate Urgency, Co-working and Co-living Revolutions held this week in Brussels, Editions & Séminaires (Laurence de Hemptinne) decided to dedicate the first part of the event to a debate on the political element of real estate development.

During a round table, first to speak was Alain Marron Brussels Councillor in charge of climate change and the environment. He said that the environment was on the table at every level of the Brussels Regions administration. And he pointed out that buildings are responsible for 60% of direct CO2 emissions in the Region. The main challenge is clearly the renovation of older buildings, some 30% of which have no insulation at all, and therefore use more energy. New buildings are already covered by constraining legislation in this domain. The objective is to move towards an average PEB of B  C, but legislation in this direction is not likely to be useful, whereas market forces (sales prices) certainly are.

Pascal Smet, in charge of territorial development (with Rudi Vervoort) said that while Brussels is a good performer in European terms where environmentally-friendly construction is concerned, it still needs more ambitious architecture. He wishes to get rid of the mono-functional aspects of some districts, which sees them dead at night. On the thorny question of the length of time it takes to obtain permits, Pascal Smet said that he recognised that the process was too slow, but did not believe that this was always the fault of the administration. But to improve matters, he is working towards replacing piles of documents by digitalisation and automation. This would make the process quicker and more coherent.

On the same theme, Minister-President Rudi Vervoort would not be provoked by Laurence de Hemptinnes probing questions. Clearly a little annoyed by the insinuations, he said that the administration is functioning well, and it has enough staff to get the job done. He also replied that if the Region has taken on responsibility for more projects of smaller size (from the communes), this is to help it plan the dossiers.

On the subject of social housing, Nawal Ben Hamou, councillor in charge of equality of chance, said that social housing required an urgent plan. The demographic boom is a reality and it is becoming hared and harder to rent or buy housing in Brussels. Some 8,000 units had previously been scheduled for construction, but only a fifth of these have actually been built. She also said that there are plans to renovate 36,000 units, and she alluded to an idea to enable estate agents to be involved in transacting low cost housing. The overall plan is to increase the percentage of social housing in the whole, to 15%.

There was a word of encouragement from Stéphan Sonneville, speaking in his role of President of the Real Estate Professionals Association UPSI. He said that the Regions plans are ambitious and good, and that UPSI is open to all ideas to try and implement them. But he also warned against too much concentration on old residential buildings affecting the much needed construction of new housing. He stated that change has clearly happened, and it needs to be given time to settle in. Also challenged by Laurence de Hemptinne on his previously expressed views, Sréphan Sonneville said he is interested in the future, not the past.
Realestate
Tim Harrup
11-10-2019