You are here : HOME > NEWS > Zin part of renewal of North District 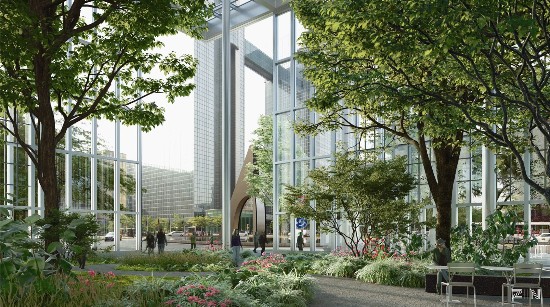 The second part of the recent Editions & Séminaires (Laurence de Hemptinne) conference entitled Real Estate, Climate Urgency, Co-working and Co-living Revolutions, concentrated on the future of the North district, and on the soon to be refurbished WTC 1 and 2 in particular.

Firstly, Amaury de Crombrugghe, President of the Up4North association, set out the challenge. The new focus on reviving the district has encouraged new occupiers to come, including in particular the Flemish authorities and Allianz. There is also much more cultural activity, largely as a result of Up4North (with owners Befimmo) making the WTC premises available for short term occupancy. Where the arrival of certain public administrations is concerned, Amaury de Crombrugghe pointed out that they chose the North District after looking at the whole of Brussels.

In terms of making the district more attractive, the ambition is to provide public facilities such as shops and restaurants, at the ground floor levels of the buildings. It is important to have people in the district, if retailers are to be attracted. The North district, in short, need to become a destination and not just a transit zone. The future of the iconic CCN building, owned by AG, Atenor and Axa, will be vital in this respect.

Moving on to the future of the WTC, it is to be called Zin a name which, Befimmo CEO Benoît de Blick said, is very typically Brussels. He described the plans as providing the first of a new generation of buildings  attractive, hospitable and energising. The two buildings are to be connected by an extra podium unit, and will be truly multi-functional, opened out to the city. In terms of multi-functionality, Zin will accommodate offices, a hotel, residential units and retailing, along with a large indoor garden open to the public.

One of the aspects of the North district to be most criticised at the moment, is that its multi-functionality (offices) means that it is both empty and dark at night. This is being countered by Zin in an extremely innovative manner. The apartments and hotel floors share the same building as the offices, not in two halves, but through alternating floors. The functions have separate entrances and of course separate lift banks, but the solution means that the building is occupied and therefore illuminated, all the time. This solution is believed to be unique in the world.

On the environmental front, along with the huge indoor garden and its 400 trees, Zin has planted facades, a 1,500 m² roof garden, roof and façade solar panels. An app for energy monitoring is available to all occupants. The objective is also energy neutrality. During its rehabilitation, only 5% of the existing materials will become waste with 95% being re-used or stocked for future re-use.