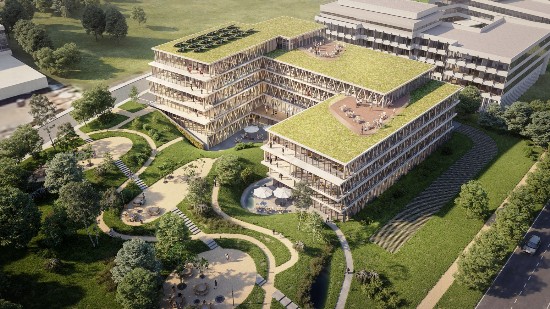 Architectural bureau Art & Build has given a conference to celebrate its 30 years of existence. The company has a well-established presence in Belgium (where it was founded in 1989) and in France (where it obtains half of its turnover) and also in Luxembourg. The firm now employs some 80 persons.

The main themes of this conference can be summarised as an environmental focus and a major involvement in the healthcare sector. Where the environment is concerned, Art & Build was a founding signatory of associations of French and Belgian architects (some 324 firms in Belgium and 477 in France) committed to mobilising the profession in the area of responsible construction. One of the issues addressed is the responsibility of architects to bring bio-diversity into cities, but bio-diversity which does not only look good, but brings benefit to inhabitants.

Within the domains of environmental responsibility and of the selection of the right materials, the use of wood as a construction material was emphasised at length. This is really taking of in France, but lagging slightly behind in Belgium. One particular example given was the new technological centre for Renault in France. This building is in wood to the tune of 98%. It was pointed out that most buildings which claim to be in wood nevertheless have concrete central cores etc Another major development is the largely wooden complex for Engie (in conjunction with SCAU Architectes and Chaix & Morel Architectes) which will see the electricity giant take further steps in its aim to decarbonise, by moving out of its tower in La Défense (Paris) and into the new ecologically-friendly 136,000 m² complex nearby. In Luxembourg, Art & Build is to start constructing a fully wooden office complex called Wooden next July at Leudelange, which is already let! Art & Build is also researching into how new materials such as cross-laminated timber can both play a part in new structures and be recycled at the end of the buildings life. And finally, the latest of the firms publications in entitled Woodtopia.

In the field of healthcare, where it achieves 45% of its turnover, Art & Build has been and is involved in several very major hospital buildings, particularly in France. Here too, the philosophy goes beyond merely building a functional hospital. They are described as living organisms and caring spaces on a human scale. Another concern is for the possibility for hospitals to be converted to other uses at the end of their lives (like other buildings) because the medical domain is evolving quickly and we dont know how people will be medically treated in 20 or 30 years. Along with the Marie Curie hospital at Charleroi and the CHU Tivoli in La Louvière here in Belgium, major realisations include the Ile de Nantes hospital complex (240,000 m²) in France in conjunction with JP Pargade, Artelia and Signes.

Turning to some iconic projects in Belgium, Art & Build has been responsible, among others, for Covent Garden, Black Pearl, Belliard 40 and Docks Bruxsel. Still to come are Belliard 9 (Kairos) and the refurbishment of the Bastion Tower at the Porte de Namur.
Realestate
Tim Harrup
03-12-2019