You are here : HOME > NEWS > New life in Cureghem district 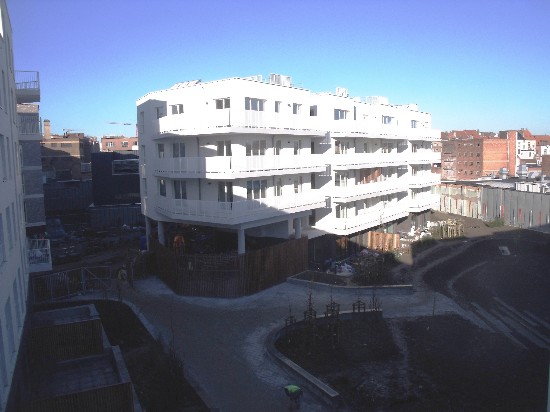 The inauguration took place this morning of the latest major complex to be developed by citydev, in conjunction with the SLRB. Named Compas after the road on which it is located, the complex is located in what all of the speakers agree is a district in need of a new life. This is the Cureghem/Heyvaert zone of Anderlecht, close to the abattoirs and in the recent past more commonly known for its large numbers of second hand car dealers. Anderlecht Mayor Eric Tomas spoke of a district with advantages and disadvantages, while citydev CEO Benjamin Cadranel added that the objective was to improve the district without chasing away the existing inhabitants. Brussels Region Minister-president Rudi Vervoort alluded to bringing a mix of functions to all newly developed districts, and to the fact that this project is one of the responses to the problem of lack of access to housing in Brussels.

Turning to the complex itself, Compas extends to 129 apartments of one, two or three bedrooms spread across 5 buildings. They are split almost 50/50 into those for acquisition (69) and those for rental as social housing (60).Designed by DDS+, Atlante and Eole, the buildings are entirely passive and are set around a landscaped central area with new public passageways. Some 240 solar panels provide some of the electricity, rainwater is collected and the roofing will be planted. Along with the apartments is a crèche with space for 49 infants, to be operated by the commune. In terms of comfort, all of the kitchens are connected to both the living area and the terraces, and the layout is such that sunlight enters the apartments more readily.

It was also pointed out that Compas represents the first stage of a wider regeneration of the area, to include a footpath following the route of the river Senne and its branches which previously ran through the area.