You are here : HOME > NEWS > 'Infinity' points to future of Kirchberg

'Infinity' points to future of Kirchberg 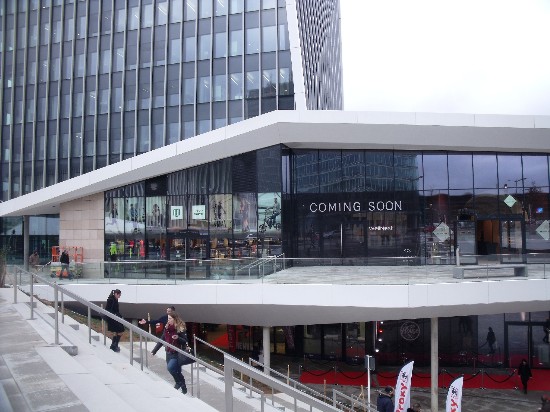 The opening of a shopping centre of just 22 units may not appear to be a major event, but in the ca se of Infinity Shopping which was inaugurated yesterday in Luxembourg, it is significant on three counts.

Firstly, this project is by Immobel, Belgiums largest quoted real estate developer, which gives it a certain standing, and is operated by Real I.S. Secondly, and more importantly, the shopping centre is part of a wider development which includes Infinity Working (an office tower entirely rented and occupied by law firm Allen & Overy), and Infinity Living, a residential block scheduled to be completed over the coming weeks. This makes the Infinity project totally on trend when it comes to the current philosophy encouraging mixed districts. Unnecessary travelling between home, work and the shops is thus avoided.

Immobel Luxembourg CEO Olivier Bastin referred to smart cities being mixed and vertical. Luxembourgs Deputy Prime Minister and Mobility Minister François Bausch, who considered the event to be important enough to merit his attendance, highlighted the all in one place concept by saying that the employees of the ministries located in the area were already happy to see that there are now possibilities on the Place de lEurope for having lunch He also said that the Infinity project fits in with the long term ambition of the Kirchberg plateau to move from being offices only, to a mixed use and residential district. At the moment, some 7,000 people live in the district, while 44,000 work there. These figures will go up to around 30,000 and 100,000 respectively. And Mayor Lydie Polfer spoke of bringing a living heart to Kirchberg.

The third significant factor in this development is that it is a further demonstration of how Luxembourg is growing even more than in the past, and attracting investment in real estate projects. Codics vast Royal Hamilius project is nearing completion in the city centre, with Galeries Lafayette, having moved in alongside. The 'Cloche dOr shopping centre recently opened, and Atenor inaugurated a new project just a few weeks ago.