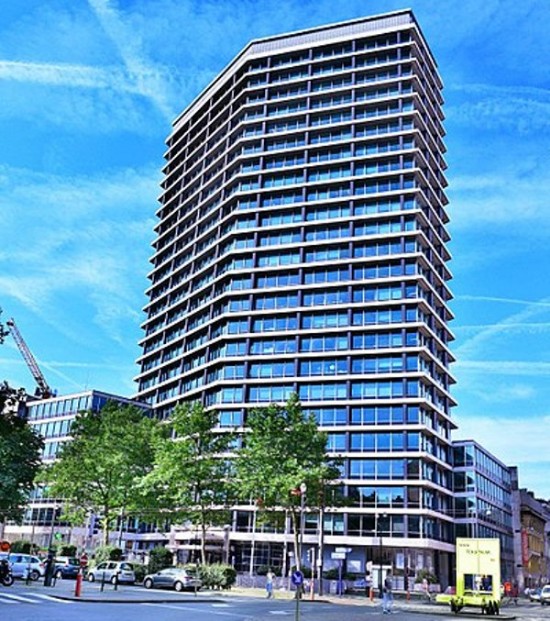 To begin the New Year, details of a major transaction in Brussels. We recently reported on the renewed interest in the Louise district, and now it has been announced that European real estate investment company Patrizia has acquired the Louise Tower (commonly known as the Generali Tower) in Brussels as part of a portfolio of six office buildings and one retail asset, by purchasing Athora Real Estate Investments B.V. from Athora Belgium for 190m. The tower is the most central of the three office towers on the Avenue Louise, as both Blue Tower and the ITT Tower are closer to the Bois de la Cambre end of the avenue. It was originally constructed in 1966, and provides office and retail accommodation.

Once the necessary permits are obtained, the 30,000m² Louise Tower is set for a major redevelopment. This redevelopment of the 25-storey building is expected to be completed by the end of 2022. The works will include a complete replacement of the façade and all mechanical and electrical equipment. Once this work has been completed, the Grade-A tower will be optimal from an energy performance perspective with its BREEAM excellent rating, and, it is stated, will have the most modern of catering facilities to respond to the needs of corporate occupiers which are expected to be from varying sectors.

Sheelam Chadha, who is in charge of transactions in the Patrizia Brussels office, comments: This exciting and environmentally sustainable project will have a highly positive impact on Brussels prime office options for occupiers. With Patrizias long track record of redeveloping properties and executing value add strategies, we are confident that this latest acquisition will be highly successful.The Tower is located in an area which lacks prime Grade A office space, home to the some of the biggest names in the world of finance, law, insurance and accounting. This lack of space in the city of Brussels has seen upward evidence of growth in prime rents. We are convinced that the Tower will be the place to be in Brussels for major international firms looking for a higher quality building than is currently available.
Realestate
Tim Harrup
06-01-2020