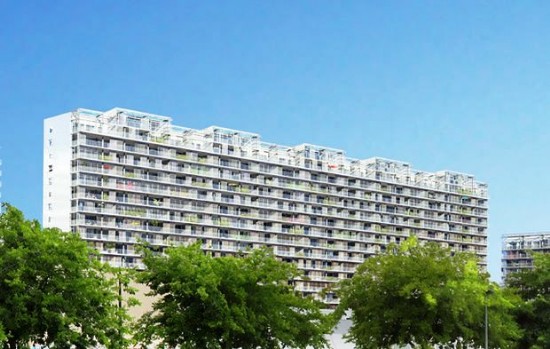 For the first Lunch with an Architect of 2020, Forum Communication invited French architect Anne Lacaton of Lacaton & Vassal. The main theme of the presentation was very much in vogue  residential accommodation and its role as more than merely a building.

The philosophy of the firm is to provide much more than traditional accommodation, both in terms of usable space and of the living experience it creates. In terms of space, a combination of a skeleton concept based on a floorplate and load-bearing pillars, along with a lack of unnecessary internal partitioning, means that occupants are free to create a far more open space layout, and that up to twice as much real living space can be achieved within the same outer dimensions. Keeping programmed space (i.e. with a pre-determined function) to a minimum and leaving as much as possible available for flexible use, is another feature of the concept. Extensive use of what Anne Lacaton refers to as winter gardens also adds to the feeling of being able to move about freely throughout the apartment and from inside to outside. These winter gardens are in effect terraces which are laid out by the occupants as gardens, and which surround the entire building. They also act as thermal buffers, as they can be closed with outer glazing during the winter and opened to the elements in the summer.

The notion of the elements is also dear to the heart of the firm. Anne Lacaton emphasized that architecture should work with the elements, not fight against them. Use and control the natural light and the heat, for example. In this respect, thermal break curtains with reflective outer surfaces enable very large glazed areas to be included in the buildings (a feature of much of the firms work). Anne Lacaton referred to greenhouses as an example of how the natural elements are used to advantage, not shut out.

One striking example of the work of the firm, and which also demonstrates another of its philosophies work with what exists and try to never demolish anything is in Bordeaux. Lacaton & Vassal won the competition to rehabilitate a huge 1960s apartment block (530 apartments), the type of apartment block which is  there is no point in putting it any other way  an eyesore in many French cities. Anne Lacaton pointed out that these buildings may need a total refit of the technical and other features, they may be in what have become poor districts, but there is normally nothing wrong with the basic structure. So adapt the building and provide its inhabitants with a more comfortable and higher quality of life.

The approach was ingenious. Without requiring the occupants to move out, the first phase was to replace all of the outdated techniques (electricity, bathrooms). Then, still with the occupants in place, an extra outer layer of 4 metres was added, to become the winter garden. Finally, the old apartment façade doors and windows were knocked out and very large glazed openings put in, totally transforming the living experience and the energy usage.

The cherry on the cake comes in the cost. It would have totalled  160,000 per apartment to demolish the building and construct a new one. The method selected cost just  52,000 per apartment.