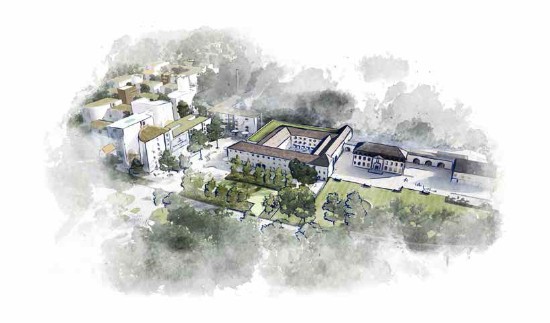 Besix RED, in collaboration with ICN Development and Tralux Immobilier, has acquired a large parcel of land for redevelopment in Luxembourg. This is the site on which Factory 1 of Villeroy & Boch was located, in Rollingergrund, Luxembourg. The City of Luxembourg had acquired Factory 2 in 2016. This site of nearly 46,000 m² of buildable area will now be called Faïencerie.

Besix RED Managing Director Gabriel Uzgen states: The project will be designed to offer a new living experience to its inhabitants which contributes to their well-being. For his part, ICN Managing Director Nik Coenegrachts comments: Faïencerie will evolve to become a vibrant and dynamic neighbourhood. Everything will be done to make sure the residents of Faïencerie feel at home there.

Located 2 km from the city center between the residential area of Limpertsberg and the Bambësch forest, it is bordered on both sides by magnificent green forests.
The historic building nicknamed Le Carré, a legacy of Villeroy & Boch, will be preserved and developed, to form the anchor point of the district and to house shops, conference rooms, restaurants and cafes. It will be a meeting place and will form the link between the residential project and the Château de Septfontaines, dating from the 18th century and which remains the property of Villeroy & Boch. The buildable area will see its mix of residential, office and commercial spaces developed in 6 phases. It is hoped to launch the development phase of Faïencerie very shortly this year.