You are here : HOME > NEWS > Customs Hall of Tour & Taxis to become a hotel

Customs Hall of Tour & Taxis to become a hotel 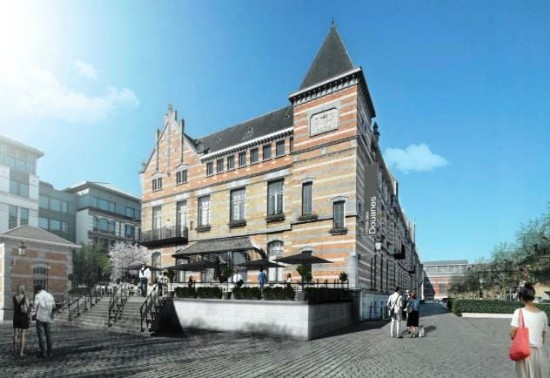 The next step in the regeneration of Tour & Taxis along Brussels canal ha s just been announced by the office of Brussels Region minister for planning and international trade, Pascal Smet.Extensa, the site developer, is to transform the former Customs Hall into a 102-room hotel. The news has also been welcomed by Pascal Smet: This is a further stage passed in the development of this site. With the forthcoming opening of the Maritime Station (to become a leisure, shopping and events centre  ed.), Brussels will soon have a unique and very attractive infrastructure. The future arrival of the hotel is an extra piece of the jigsaw of the attractiveness of the zone and of the Region".

The original building was constructed between 1904 and 1907 (during the same period as the other elements of the former rail freight hub and customs complex originally known as Thurn & Tassis) and still retains many of the period architectural features. The renovation of the building will see the addition of terraces on the street side, and the massive wooden double doors retained.

One of the elements of the Customs Hall which still exists is the metallic structure supporting the roof, along with iron columns. It is perhaps not generally known that in another of the iconic buildings of Tour & Taxis  The Sheds  the iron supporting columns were, when built, holding up the largest roof in the world without the aid of central columns; anyone who has been to an event in the Sheds will have remarked on the totally uncluttered space. It is also worth looking at the peripheral iron columns and noting the articulation at their base. This was because as Tour & Taxis is located on a former marshy area, the structure was designed to be able to move slightly!
Realestate
Tim Harrup
10-03-2020