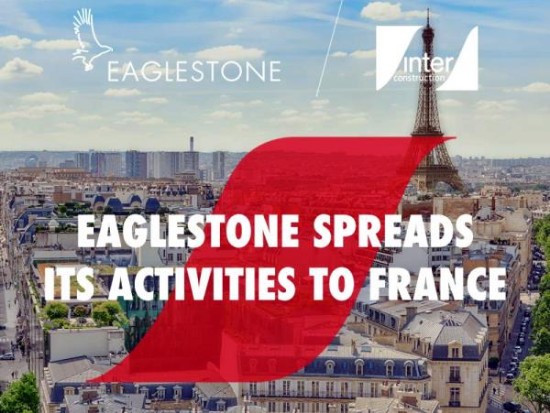 A relatively new developer on the Belgian real estate scene, Eaglestone (Nicolas Orts and Gaëtan Clermont) has announced a major new step in its growth. Founded in 2010 and already active in Belgium and Luxembourg, where it has a portfolio of 35 projects (residential, offices, retail) with a combined value of around 700 million Euros and a 2019 turnover of 160 million Euros, Eaglestone is now expanding into France.

This move is not via a first development project in the country, but via an acquisition. The company is set to take over 100% of Interconstruction, a developer active in Paris and the surrounding Ile de France region. Like Eaglestone, it has a leaning towards residential, which represents 70% of its activities, and produces some 600  700 residential units per year. The rest of its production is mostly in offices. The turnover of Interconstruction, whose Managing Director and Director General Marc Villand and Gilles Imbert will remain in post for the next five years, amounted to 185 million Euros in 2019. The company is a major player in its region, with more than 40 projects representing over 300,000 m² and a workforce of 46. These figures, as can clearly be seen, mean that Interconstruction and Eaglestone are very similar in terms of size. Interconstruction is also involved in some of the stations of the ambitious Grand Paris project which is substantially adding to the investment attractiveness of the French capital.

Speaking of the move, Eaglestone founder and joint CEO Nicolas Orts says: Eaglestone is thus becoming a European player with a team of 80 talented persons managing over 75 projects in three countries and over 500,000 m² in the portfolio and under construction. Interconstruction director General Marc Villand, who is also president of the Ile de France Federation of Real Estate Developers (FDI), for his part declares: We very much believe in the synergies between Eaglestone and Interconstruction which will enable us to strengthen our positioning on the office sector, the sale of our projects to institutional investors and the development of our value add projects.
Realestate
Tim Harrup
11-03-2020