The Loop, still the place to be for office buildings development in Ghent 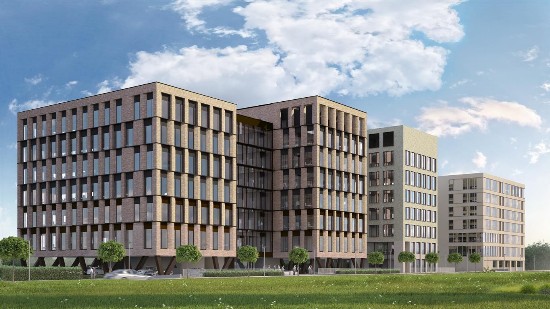 In 2019, the Ghent office market was characterised by a very low vacancy rate (3.5 %). Real estate advisor JLL considers this to be a bubbling market. In 2017 for the first time, take-up of over 50,000 m² was recorded in Ghent. This positive trend continued through 2018 and 2019 with take-up of over 55,000 m². JLL believes that these figures position Ghent as an office market in its own right in Flanders.

A developing market
Despite these positive indications, developers have up to now been somewhat reluctant to undertake at risk projects. This trend is gradually changing with a certain number of projects in the pipeline. Steven Peeters, Senior Director at the JLL Antwerp office agency comments on this change: Ghent needs projects in order to respond to future demand for offices. There is a great level of interest among office users for modern and high quality buildings. A project such as Networks Gent fully responds to these needs thanks to its unique location and its allied services. Demand combined with limited quality supply is exerting pressure on prices. Future constructions in Ghent will have to be marketed at rents of  160 /m²/year or more.

Projects pipeline
The The Loop district remains the place to be for new projects. This is the area in which are to be found in particular Flanders Expo, IKEA and the iconic KBC Aartevelde tower alongside the E40 motorway. Several developers have taken positions in this district in order to construct substantial volumes in the short term (> 5 000 m²). ION has recently delivered the Pulse project, MG Real Estate  the developer which constructed the KBC tower  has received planning permission for the development of the MG Square project on the Kortrijksesteenweg.

On the Networks Gent site, Banimmo is beginning the construction of two office buildings representing a total surface area of around 15,000 m². There is the potential to develop some 48,500m² of offices on this site. The JLL Office agency has a co-exclusive mandate to market this new project. The delivery of the first two buildings One and Two is scheduled for the end of 2021. Sustainable constructions which will in particular include planted roofs, rainwater recuperation and internal climate control via geothermal techniques.

Priority to mobility
Ease of access and mobility for employees are increasingly important as determining selection criteria for the location of an enterprise. The Loop site benefits from easy access from the E40 and E17 motorways. Nevertheless, car traffic in The Loop district often poses problems during major events at Flanders Expo. Extra alternative and soft mobility solutions have been developed by the City of Ghent with the installation of secure cycle routes which enable fluid liaison with Ghent railway station. Access via public transport is now facilitated by the tram line which connects The Loop to the city centre