You are here : HOME > NEWS > Brussels Law courts get new lease of life 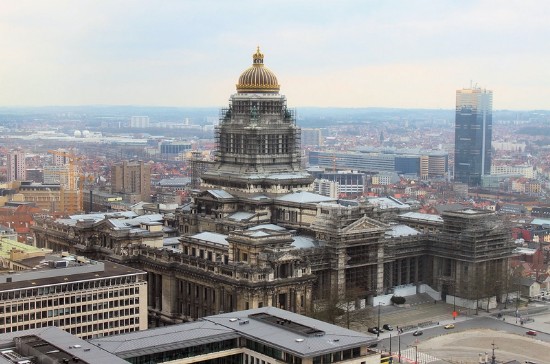 The installation of a new security system in a building would not normally be of interest to this website. The inauguration yesterday of the new scanstreet at the Palais de Justice in Brussels is interesting from at least two points of view, however, and it attracted the presence of two federal ministers.

Firstly, an overview of what has been done. Scanning machines similar to those in airports have been installed at the main entrance, with separate entries for magistrates, lawyers, visitors and suppliers. The works have been carried out with the approval of the Monuments and Sites Commission, to ensure that existing architectural features were properly taken care of.

Interior Minister Jan Jambon (photo) explained that to describe this work as necessary is an understatement! He said that zero risk does not exist but that everything had been done to reduce the risk to a minimum. The new scanstreet is now definitive, and the same system will be installed in other law courts such as Antwerp and Charleroi.

Moving on to the wider significance of the works, Justice Minister Koen Geens said that the investment confirmed the commitment to maintain the justice services in this building, which is and remains a genuine symbolic monument. This confirmation appears to put an end to rumours that some parties within the government might wish to relocate the main justice service elsewhere. It also seems to end speculation that the Palais de Justice might become a mixed use residential and shopping complex.