You are here : HOME > NEWS > Lunch with a down to earth architect

Lunch with a down to earth architect 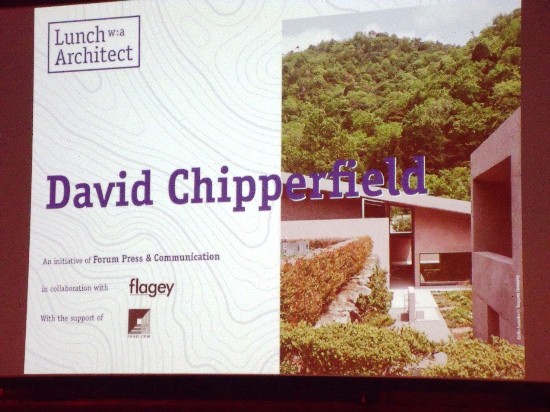 The latest Lunch with an Architect organised by Forum Communication (Nathalie Zalcman and Kathleen Iweins) in the appropriately magnificent surroundings of Flagey, featured British architect Sir David Chipperfield. For this edition, the emphasis was on concrete as a material, and David Chipperfield concentrated on this aspect and also on the wider role of the architect in society.

Starting with concrete, it was pointed out (to the surprise, presumably, of almost everybody in the audience), that the largest existing unreinforced concrete dome in the world is that of the Pantheon in Rome, constructed in the second century!
David Chipperfield said that back in the 60s and 70s in his native England, concrete was synonymous with ugly buildings. But nowadays, when the trend is for buildings to be made of a structure and a covering (such as a brick façade on a load-bearing structure) concrete offers the advantage of providing, in certain cases, the same finishing on the inside of the building as the outside. It is physical and monolithic, which is why many architects like it. There is something beautiful, he said, about a solid material which presents this characteristic. Care has to be taken, however, with the risks associated with concrete which is cast in situ and that which is pre-cast. The latter has had faults and imperfections removed before coming to the site, the former cant This, among others, tends to make the contractors nervous.

When it comes to the role of the architect in society, David Chipperfield is proud of the fact that his architecture is somewhat everyday. Why do all buildings have to try and be individual works of art, he asks, when what is required is a space which fits in with its surroundings. A single plot of land with a construction on it cant change things, he argues, but a complex of plots and of buildings can influence the way a city is seen. He believes that far too often people say Look at that fabulous piece of work by XYZ architect, rather than simply Look at that fabulous building.

A third topic was that of renovating ruins. David Chipperfield is not in favour of trying to rebuild everything as though it had not been a ruin, but of retaining  as un-improved as possible  that which survives, and of replacing that which has been destroyed in as similar a manner as possible to the original, without trying to pretend that it somehow is the original. To illustrate the point, he used a war-bombed monument located at Museum Insel in Berlin. Make it a more beautiful ruin is the way he put it. And also in Berlin, he returned to his theme of architecture playing a role in society. His firms original offices included a canteen in an area which (then) had few cafes. So the local population started to come for lunch, including a famous film director. Notoriety followed, of course, and the firms new building includes a new and bigger canteen. Architecture has therefore become community.