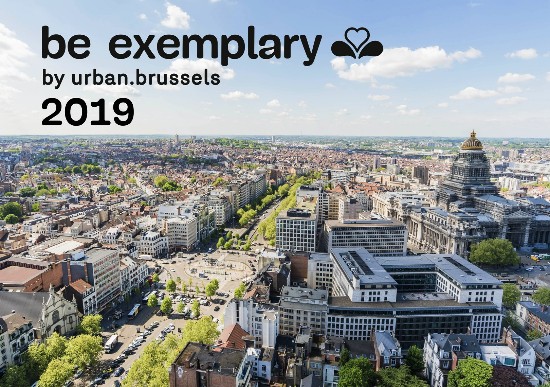 The Brussels Region, via its agency urban.brussels, has just launched the fourth edition of its annual be.exemplary competition. The agencys Christophe Bastien pointed out right from the start that this is not an architectural competition in the normal manner, but a scheme designed to promote innovative and exemplary architectural projects of all sizes which respond to four major challenges: promoting high quality urban architecture; encouraging projects with a social dimension; taking up environmental challenges; contributing to the circular economy. Winning projects have to be exemplary in at least one of the four criteria, and acceptable in all the others.

There are three categories  small private projects (max 3 apartments or max 300 m²), large private projects and public projects of all sizes. To illustrate the desire to cover all types of construction, previous winners include a private house at one end of the scale, and the Multi Tower (Philips building) on the Place de Brouckère at the other. There have also been schools, other infrastructure buildings and even a public waste disposal site.

This year, the subsidies which are granted to the winning projects have been adjusted to make it more attractive for private projects, if a little less so for public projects. Winners receive a financial contribution expressed in a certain sum per square metre, plus guidance as required. They have to bring their project to completion within four years of being named a winner (although in view of the notoriously slow administrative procedures in Brussels, there is some flexibility for this).

In practical terms, candidates have to submit their dossiers to the organisers by June 26th, and these are then evaluated by a jury in September. The jury itself is made up of a member from urban.brussels, one from Brussels Environment, one from the Bouwmeesters office and four external experts. Winners are announced in December after the Brussels Region government has given its approval.
Realestate
Tim Harrup
12-04-2019