You are here : HOME > NEWS > More development by citydev at Lavoisier City site 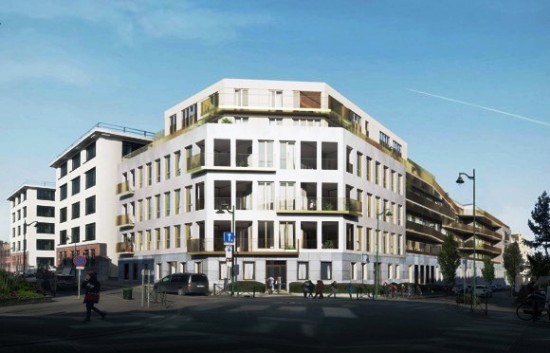 It is in the commune of Molenbeek that citydev.brussels has announced its latest major residential development. The agency is to construct 93 apartments on the Lavoisier City site which is bordered by Rue De Koninck, Rue Van Kalck and Rue Charles Malis. This site is thus in the Osseghem district and had been occupied by a British American Tobacco factory from 1925 to 2001. It was acquired by citydev in 2002 and split into separate entities.

The site comprises a number of buildings, with the factory part which has already been redeveloped by the agency currently accommodating light productive activities. A second portion was sold to the Brussels Capital Region Residential Agency (SLRB) which has itself already developed 89 social and low rent apartments.

The final building is the tobacco companys office building, which is still undertaking this function until the lease end in March 2020. Following this, citydev is to construct 93 subsidised apartments designed to improve the social and functional mix of this district. Along with the apartments will be a retail or services unit of 129 m², 235 bike parking spaces and a 76-space underground car park. Around a third of the apartments will respond to the zero energy criterion.
The architecture has been mandated to a grouping involving Trans Architectuur  Wessel De Jonge Architecten  Java Architects and works will begin at the end of next year. For citydev, this operation also represents an opportunity to experiment with an offices-to-residential conversion without demolition.