You are here : HOME > NEWS > Real estate: what the market thinks - ULI 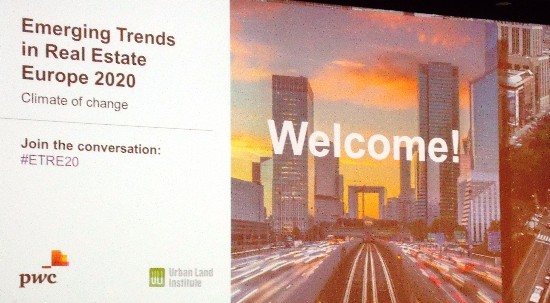 The ULI (Urban Land Institute) presented the findings of its report entitled 'Emerging Trends in Real Estate' yesterday in Brussels. This Europe-wide survey,co-published with PwC and involving 900 senior real estate leaders, was outlined by ULI Europe CEO Lisette van Doorn. She started out by explaining that the ULI is the oldest real estate association in the world, dating back 83 years.

Sub-titled 'Climate of Change', the report sets out its findings in six categories. Firstly, low rates high interest, refers to the fact that going forward into 2020 and beyond, while worldwide political instability is beginning to impact on economic growth, real estate remains an attractive asset class for investors in view of the low interest rates. The money is increasingly coming into Europe from the Pacific region, with Japan now making an entry alongside the Koreans.

In the development category, where the attractiveness of undertaking new developments is concerned, the focus is on construction costs, with two thirds of respondents believing that ever higher costs are having a negative effect on their decisions to develop.

Moving on to the third category  Environment  this is now felt to be a major issue but it is still difficult to make a business case for the environment. This contrasts with the energy transition, which can easily be costed. However, shareholder demands in the domain of the environmental impact of the buildings owned by a company mean that this issue is likely to represent a growing risk for portfolios over the coming years. The real estate market, it was found, is only just beginning to evaluate the environmental impact in urban areas.

The next category involves the most popular sectors in the industry. Here, while logistics comes out in top spot, six of the remaining ten spots are occupied by residential accommodation in one form or another. Positions two to six read: retirement housing, co-living, residential, student flats, affordable housing. This last category represents a risk for development, with the prospect of cities applying rent caps in order that vulnerable people can afford to live in them.

Retail comes very low down in the list, with a general sentiment that assets are overpriced, and that there is likely to be more consolidation among retailers. The re-purposing of properties  mainly from offices to housing  is a continuing trend.

The fifth category looks at which cities are most attractive to developers and investors. Bad news for Brussels, which does not figure in the top ten. The head of the list in fact reads Paris, Berlin, Frankfurt, London, Madrid. Of particular interest here is the reason  apparently alluded to many times  why Paris is on top. This is because of its transport strategy and the overall 'Grand Paris' programme. The transport strategy, very dear to the heart of mayor Anne Hidalgo, is opening up new areas of the city which are therefore ripe for development and investment. On the downside for Paris is quite simply the cost.

The final category follows on from the above  smart mobility. This was a special topic in the report this year, and revealed that 55% of respondents believe that smart mobility should be part of any urban development plan, and 58% think there is an increasing role for developers in delivering smart mobility options (car-sharing, electric scooters...). Some 51% state that the mobility infrastructure of a city plays a part in investment decisions. And mobility options have an even greater impact in the suburbs, which are less well served by traditional public transport. Other elements to emerge in this category are, unsurprisingly, smart last mile programmes, and the fact that getting rid of cars from city centres means that former car parks can be turned into real parks.

A further report on the round table discussion which followed the presentation will follow on this website.