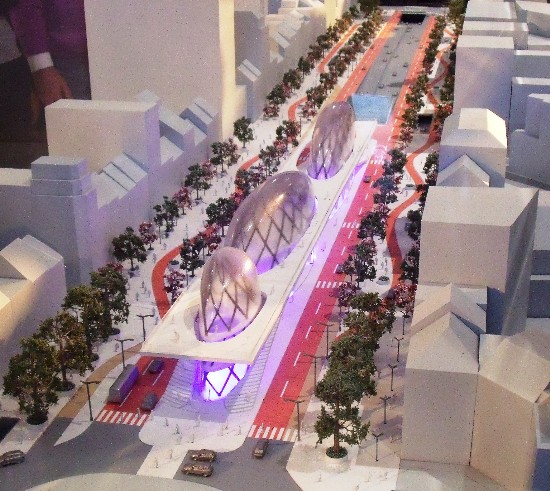 The project developed by architects Pierre Lallemand & Partners to redevelop the Toison dOr / Boulevard de Waterloo in the uptown area of Brussels, took another symbolic step forward on Friday when the physical model of the plans was unveiled for the first time.

Speaking for the associations involved in this project, Roland Cracco CEO of Interparking, pointed out one of the fundamental principles behind it, namely that those most closely involved had been consulted from the very start, and that this is why this project appears to have general approval. Most importantly, the retailers of the entire district were involved and have given their green light. On this point, Roland Cracco said that one of the problems with the controversial pedestrianised area of the downtown district around the stock exchange, was that it was imposed on local inhabitants and businesses, who had no say in its development. Where Toison dOr is concerned, the architects and others had asked for propositions, and have always taken into account requests for amendments and modifications.

Three of those persons to whom the finished model and plans have been presented are the mayors of Brussels (Philippe Close), of Ixelles (Christos Doulkeridis) and St. Gilles (Charles Picqué) along with Minister-President Rudi Vervoort. One request to emerge from these meetings, expressed by Christos Doulkeridis, is to further connect this project to the newly renovated and largely pedestrian Chaussée dIxelles which, together with the two avenues concerned and with the lower part of the Avenue Louise, form the uptown shopping district of Brussels.

Remaining with this district, one of the reasons the retailers present here like this project is that it finally gives the district an identity which it has always lacked. It also handles the question of mobility by a mix of transit and cycle/pedestrian routes.

The next stage of the process is a meeting with Secretary of State for the Region Pascal Smet, on January 15th. The normal public enquiries will follow. It should be noted that a second project is still in the running, requested by Pascal Smet and designed by Bruno Fortier, Polo and Arcadis, but there seems very little chance, according to those who have most closely been following the dossiers, that this one will succeed.