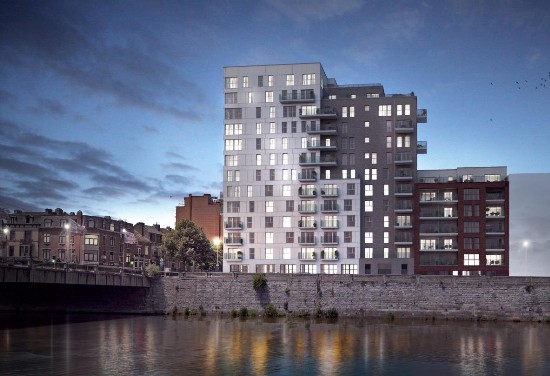 BPI Real Estate, Thomas & Piron and UrBa Liège have announced that a private project named Bavière has reached the point of being commenced in Liège. With the granting of the planning permission for unit D, including 149 apartments, 3 commercial spaces and a nursery as well as parking spaces and cellars in the basement, Bavière Development is now beginning the marketing phase.br>
Brought together within Bavière Développement SA, the three partners state that their objective is to rebuild an entire district within the city by focusing on the spirit of the neighbourhood and conviviality, reconnect Liège and especially its inhabitants to this legendary site and revive Bavière as an interconnected, intergenerational district with a remarkable quality of life. Abandoned since 1987 and after the failure of certain private projects,the Bavière site was acquired by the consortium in 2012. The site underwent an impact study based on a Master Plan validated by the competent authorities (City of Liège and the Walloon Region) in 2017.The project is located within an extremely densely-populated urban context and above all, it is steeped in history. In addition to its historical aspect, the site is strategically located giving it a major role in the evolution of the City of Liège and in particular, the Outremeuse district.

The project will offer a wide mix of functions designed to revitalize the neighbourhood for a very diverse audience, both by age and family structure. By integrating the urban context of today and especially of tomorrow, the proposed residential offer, say the developers, will respond to the lifestyle evolution in the citybr>
Included in the programme are standard apartments of 1 to 3 bedrooms (representing more than 15% of the global offer), and a a building with lofts. This building will also include a co-working space and a common outdoor area. With the establishment of a medical and academic centre on the ruins of the old Bavière hospital, diversity will also be extended to district level. The developers have chosen to preserve the hospitals old facades, which will allow continuity with the site's history, in both form and function. A sports centre will also be part of the project, as well as student housing, a nursing home and an assisted-living residence, all complemented by housing units.

The site has also been designed to encourage openness towards the city by improvements, cross-district connections, in particular with regard to the redevelopment of the Boulevard de la Constitution at the border of the Bavière site, whose central space will become pedestrian. The developers go on to say that in order to encourage the development of interconnected soft mode corridors, the internal circulation of the future district will be exclusively reserved for soft mobility (pedestrians, bicycles). Image: Assar, Audex
Realestate
Tim Harrup
18-03-2020